Never look a gift horse in the mouth 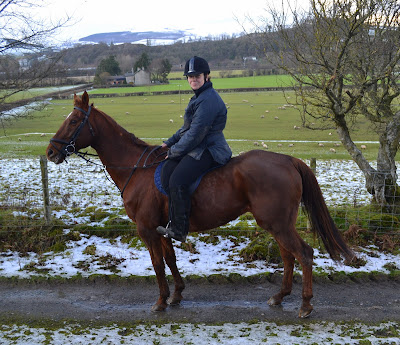 Observant readers will have noticed this handsome chap lurking in the background of some pics here at Rock HQ for quite a while now. This is Chester, a 16.1 thoroughbred retired hunter who was given to us by a lovely family who wanted a good forever home for their boy. Now call me old fashioned but whoever heard of anyone giving away such a nice horsey so being the cynical sort I subjected them to the full inquisition (without the comfy chair) until I had not only his full life story but also his dentists name and address. Tracey is the horsey one of the two of us, and she put him through his paces, I took him for a walk and explained whats what here, he knew who was boss so did his best to impress her. The really nice people who gave him to us also gave us his tack, sleeping bag, toothbrush and several weeks supply of food. After several visits all were happy and Chester was welcomed into the fold. He arrived in style having cantered most of the 10 miles across country to get here in around an hour and a half.
Since living in his new house he has been as good as gold, even staying in the yard over night on the third night (no gates or fences between him and the wilderness) after Thor had decided to release him just for a laugh. He has been introduced to the critters, for some reason Hetty is eyed with suspicion but rampaging porkers and terrorist shitland ponies are taken in his immense stride.
Today was my turn to take him out, after he had been "tired" out by my beautiful and oh so patient wife. He stood quietly while I clambered on, we got ten yards, I felt about as safe as sitting astride a giant razor blade strapped to an Exocet missile (I had been warned he was narrow, and more like a in his Ferrari in his responses than a sofa, which is an apt description of the speed and handling of my pretty boy gypsy cob) The patient one gave some good advice, most of which was centred around you have to stop shaking, but after seeing my future, lying dazed and confused over the hills and far away I pulled the eject handle and baled out on the lane to return to the cottage to find something useful to do. Like wrapping presents. 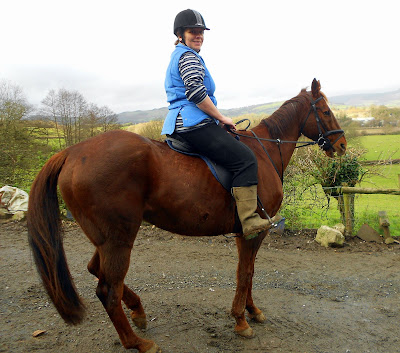 He is a lovely boy, and we would like to thank Lyn and Hayley for their very generous gift. Merry Christmas.
Posted by Tony at 20:50

And pray do tell just how this nag fits into the "we're not having nuffin' that doesn't pay its way" Rock HQ ethos??????

A very Happy Christmas to you and yours.

Very pretty horse, though Trevor will have his work cut out for him if he tries to mate with Chester. I won't doubt it if Trevor or Misty couldn't just walk under him !!!
And a Merry Christmas to you.
Kit