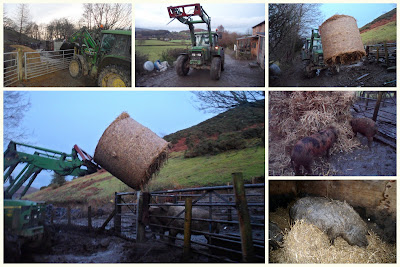 The torrential rain has turned what is usually a nice dry pig pen into something that resembles the area in front of the main stage at Glastonbury. A large section of the roof blowing off the amost barn also added to the potential misery of the trainee sausages. Being the kind forward thinking type I had already ordered a lorry load of straw middle of last week. Twice they failed to show up, then I got a call, be with you Friday morning. So here we are Sunday, midday, torrential rain, frogs kayaking in the lane, and the phone rings, be with you Thursday. Cheers. Poor pigs. They risked drowning. Thankfully help was at hand and after giving the secret code words via the miracle of wireless telegraphy (do you want some money?) a cheerful member of the militia turned up in an armoured vehicle and dropped off some more feed for the horses we havent got and some bedding for the pigs.

Two minor difficulties (only two?) one being the bale of straw was around a ton in weight and would need shifting once delivered by hand, and the second was that half an hour previous to the delivery I had been playing with Thor (nothing sordid) the lad likes a back rub, so he got one, and a few carrots and basically a bit of man boar bonding took place. No real dramas, except that when getting in a pigsty with six sows in season I suspect its written somewhere in the how to guide, that you really should avoid physical contact with a boar. The sows were in raptures, firstly over having a new bed delivered, but secondly that yours truly smelt like a male pig (no jokes please) and this led to a rather exciting bed making session for all concerned. 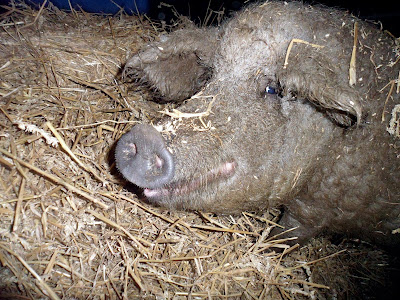 Bridget the biggest Mangalitza made it quite clear she would be first in any que, driving off the competition as I carried the straw through to her boudior by the armful. Being leered at by a female pig (again no jokes, I'll make the necessary ones) is quite disconcerting as you go about your lawful business. Eventually the sexual inuendos became to much to bear so I baled out (see, jokes aplenty) and with Bridget chasing after me grunting the piggie equivlent of take me now or lose me forver I clambered over the the metal work that I hoped would save me from a new pork sensation. Once the safe side of the five bar gate I stopped to watch Bridgets attempt to mate with the remainder of the bale, it now smelling as much like a male pig as me (leave it!)

This was, I thought as I headed back to the safety of the cottage, bringing a whole new meaning to the term humping bales.