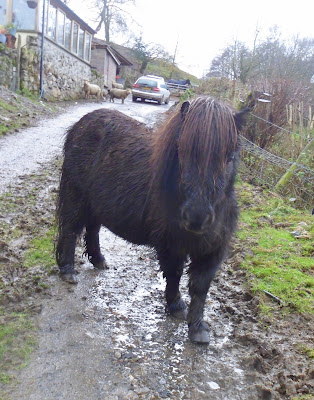 It must be getting close to Christmas, we never ever see our post person, even though we know Steve the post exists he's seldom seen. He even signs our recorded post for us and bungs it in a steel box half a mile from the cottage. Today as I was dealing with horses we haven't got a red van with a familiar logo appeared. Things have obviously changed our end of the lane as he got out of the van with his jaw scrapping the floor. "I remember this when it was all fields" he wise cracked. Funny man.
"You should be on telly" I countered, but before I could ask where his cat Jess was he thrust a large parcel in my frozen hands. "Didn't want to leave this at the end of the lane, not at this time of year" he winked theatrically. The contents of my pockets were not suitable for tipping hinting posties unless he wanted half a dozen wet roses wrappers (early opening of half price chocs, guilty) some dog biscuit, a ring pull, string, some Aubious (google it, it plays havoc with zoom lenses) a camera that sometimes works and lots of fluff. He stood watching me as I did the universal patting of pockets ritual when you want to tip but cant. I did eventually give him a tip, "Don't run over the pony as you reverse down the lane, you'll only annoy her"