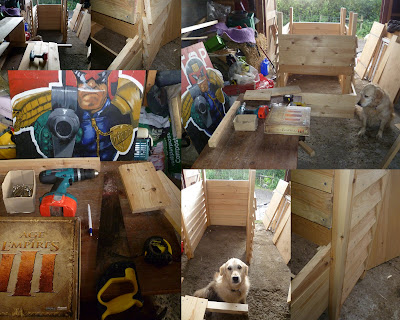 Left to my own devices I finally got round to a job that has been hanging over me for quite some time. Its a good job Tracey, my beautiful and oh so patient wife is, as patience is a quality that is needed around me. MY sense of time is a bit different to most, days are shorter than I think they are, weeks are around 10 days, a month is twice as long as most and deadlines are to be avoided at all costs.
For a while a very nice collection of wood has been waiting my attention in the workshop. For a while it was out of sight out of mind as was most of the workshop. But I knew it was there, and what it was for, a chicken coop (the wood not the workshop), well two actually, and while its waited for me to assemble it chickens have hatched, got eaten (not all by us) and dust settled. Workshop cleared out, the wood got moved, and now this visible guilt trip finally prompted action. Another prompt was a large number of chicken coops suddenly appearing on the "watch" list on ebay. So while the love of my life took our apprentice smallholder to visit family I decided to use the opportunity to create a masterpiece. My extensive toolkit of biro, rusty saw, tape measure, drill, box of screws and computer game box (it was the only thing that had any sort of right angles, essential apparently) soon, as in 10 back breaking hours (but that's 10 hours of heavy metal music, bonus!) under the watchful eyes of the dogs, we had a flat pack chicken coop. End of play saw a fine chicken coop with nesting box, cute little door and a variety of excellent and almost neat joints, the one in the bottom left of the picture I am particularly pleased with, and all without having to visit casualty. Its in sections so it unscrews, which is just as well as it weighs a ton. All that remains is to put the roof on and paint it. Tracey returned and was very pleased to find that I had been so busy, apparently its only been two years since I first said I would build it so she thinks I am ahead of schedule. Roof and painting happens this weekend, that's this weekend as in Saturday, not Wednesday.

Good to know I'm not the only one with this carpentry method.

Its the only way!