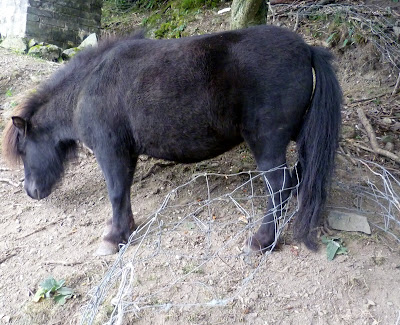 Bella barking in the Corral OK alerted us to little Misty's big problem. Up on the uber steep slope (trainee cliff) above the corral but under the rock (keep up) our brave and curious pony had boldly gone where no other pony had gone before and soon found out why when progress ground to a halt thanks to a section of old stock fence that had fallen from above and is on the to do list but never seems to get done. Thankfully I had my pocket bolt cutters amongst the detritus of baler twine, old mints and unlucky rabbit, foot.
Misty chose not to stove my head in as I fumbled around the danger zone and after several tense moments as I chose which wire to cut (cutting the wrong one would have meant an explosion, of one sort or another) Misty was free and scampered off without so much as a backward glance. Her not killing me was payment enough. Moving the old wire is now job five for this Saturday, its below clean the helipad, clear 2 acres of bracken, clear out the stable and pressure wash the inside and mats, and move my unmade Airfix models from the utility room as they are in the way. Apparently the cats need the space to sleep in. I know my place.