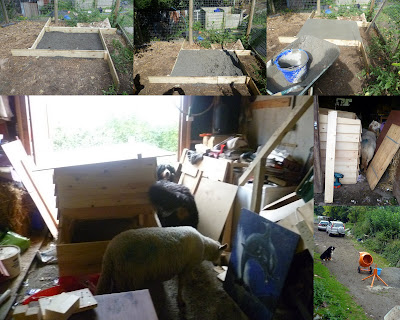 Good news first. Our morning was heralded not by Biffer who usually wakes us around 5.30 am, not by the alarm clock, its Sunday its off, no, by a cow calling across the field. Fearing the worst as it was mummy cow stood over the stricken calf all seemed lost, she was telling the world he had gone. A twitch of the tail showed he was hanging on in there and she was calling for help. As soon as we could we consulted The Oracle. Within minutes he called back, a rescue party was on its way. Sure enough within the hour the militia turned out, mum and calf were taken into a barn and as of an hour ago both are fine. Good news.
The painting of the chicken coop is progressing slowly, as in the door was painted and the hinges and bolt, but in keeping with the smallholders rule that each job done creates two more I decided that as so much time and effort (lots of time, two years planning) had gone into making such a brilliant hen house then why spoil it by standing it in mud. George was summonsed for his second job and pretty soon a sizable concrete pad was installed in Stallag 14. Any one wondering why the shuttering boards are arranged as so, its so I didn't have to cut them, means we can use them again. That's the plan. Unlike most DIY types I have a few additional complications when approaching any task, aside from incompetence. Like, how do you get an even coat of paint on the hen house without fur and wool, see pics (click on image and super size it) but the best was how do I get a barrow load of concrete 50 metres without letting cow out of gargen, tripping over piglets, letting hens out or having Bernese Mountain Dogs step on finished product. Answer. Mostly distraction with foodstuffs or threats with big stick. Sometimes life's so simple!