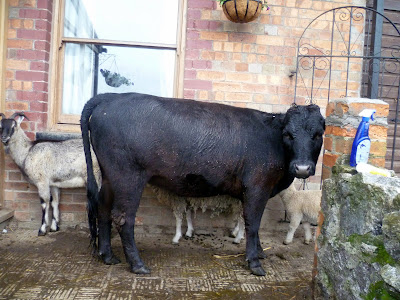 The rain sent everything diving for cover today, including us, and at one stage there was quite a collection of animals under the eaves of Rock HQ, perhaps they thought it was an Ark. 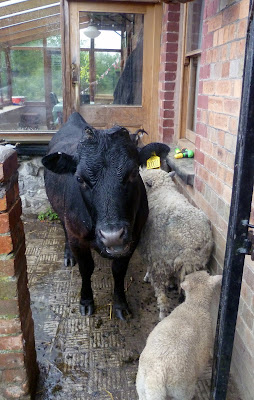 Hetty made herself useful by licking the front window clean, the deposits she left behind took the shine off her efforts though. Ambrose who has been released from maximum security by my beautiful and oh so patient, yet too soft to goats wife gave him the born free moment. He totally ruined this by getting into the veg garden and rooting up the new strawberry plants. Suitably chastised he is hiding, once found he is back in the stockade.

As we were confined to barracks we sorted out the pigs. 140 pound of sausage bagged up, belly roasts rolled and stuffed, various offensive looking bits of pig were cooked for the dogs, and as is traditional a nice slice of pork belly was in the pan while the rest of the pig was delicately placed in Mr Whirlpool, who is now back in action thanks to yours truly fixing the fuse box. This had the added effect of fixing the pantry lights, so no more groping in the dark for gin and settling for baked beans. 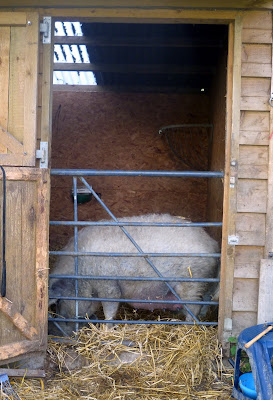 True to form Pam has refused to deliver little piglets, even though its D-Day (due day) but she seems to have changed shape again, and maybe producing milk. As we have no stool low enough I refrained the urge to milk her, we enough milk in the fridge anyway. Its easier to get it from the Co Op than risk losing your fingers milking a pig.

Mmm Sausages we can almost taste them !!!!!