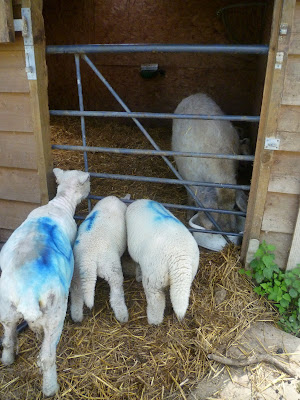 Experience is a hard school, as the saying goes. Our little flock has been hard pressed to find pasture worth eating on the Bonsai Mountain so it has bothered me that one of the holiday homes has lush green grass going to waste, around a quarter acres worth. On seeing Geisha (RIP) undo the gate and let her adoring Ryelands onto the verdant foodstuff I chose to leave them there rather than chastise them. Several days later an irate Murph (holiday home owner) remonstrated with me for allowing my beasts to defecate on his "lawn". I suggested they were doing him a favour keeping the grass down, he thought differently, he would rather mow than scoop fresh poop. So he padlocked the gate and Geisha (RIP) was unable to breach the new security.
So the grass grew.
And grew.
For twelve long weeks.
I saw Murph on the weekend trying to trim the two foot long blades of green with a budget electric strimmer with six metres of cable. After several hours he had managed to clear a path to the door and a small area of "lawn" in front of his holiday home.
On a walk up to the Technohermits abode I saw all our flock munching contentedly on the forbidden territory. Technohermit filled in the gaps, Murph let them in by removing part of the fence, seems he lost the key to the gate padlock. Murph thought that it was definitely easier to scooop poop rather than strim fresh jungle.
Lesson learned.