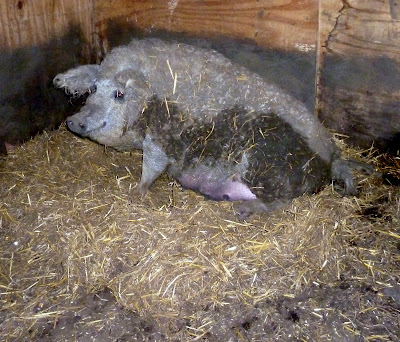 There was a break in transmission yesterday, no update, the reason being Bridget the Managalitza, who has been living quite happily at the far end of the smallholding, not causing any bother at all, disappeared. Now a huge pig the size of a pygmy rhino is a hard thing to disappear, but she was gone, nowhere to be seen, ostensibly nowhere near the food trough. Now a beast that size off its food can only mean one thing. Trouble! 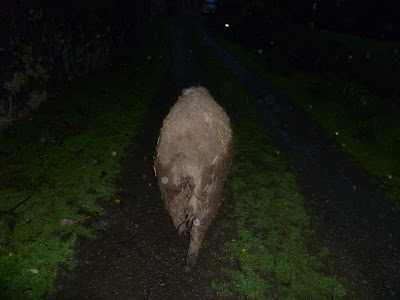 Armed with flaming torches and pitchforks we entered her lair, I say we, the Royal we, as in myself all alone as Tracey my beautiful and oh so patient wife knew better than to enter the pig wrestling championship. Bridget was in her bed, which was now several feet high and was only missing a big pink neon sign saying "Pig about to give birth!" as a final clue to events about to unfold. Trying to persuade said pig about to give birth to leave what in her mind is a carefully constructed birth pad and venture out into the dark, rainswept unknown was a challenge and I have to admit to it being the type of challenge that raised my pulse a few 100 beats per min as she made her displeasure known with several attempts to sever my legs blow the knee. Events were not helped when Morgana seeing a bucket of feed being swung around gatecrashed the party and disarmed me of said bucket. I let her off this playful pig banter and focused on Bridget who reluctantly wandered into the lane where I eventually got her within piglet range of the back stable. Several times. 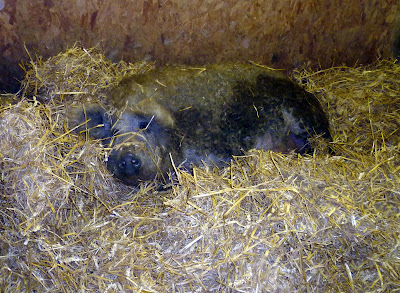 After a few dozen sprints for freedom and a pretty good attempt to pole vault back into the pig pen Bridget was cornered in the back stable where much to her surprise she found a lovely clean bed, running water and electric lights. She lay down and got on with it while I steadied my nerves with a large single malt. Never having seen a pig birth before I was keen not to miss the action, and now having seen a pig birth I can honestly say its unlike any other birth I have seen. Its like something out of a Ridley Scott film, a bloody noisy traumatic alien mess. Once the video gremlins have been evicted fom this site I will put a clip on which shows the piglet popping like a champagne cork from its mums bits with the sow shooting in the other direction just as fast and making a noise like a disabled Stuka. 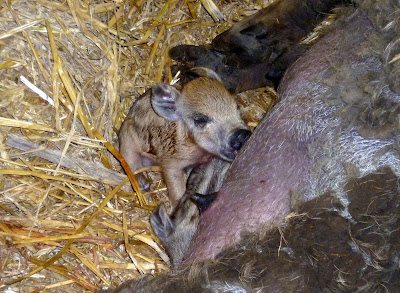 But it was worth the trauma to see these little piglets arrive in the world, there were only two, not named yet, but its the names are bound to be linked to the Solstice. Or the film Alien. 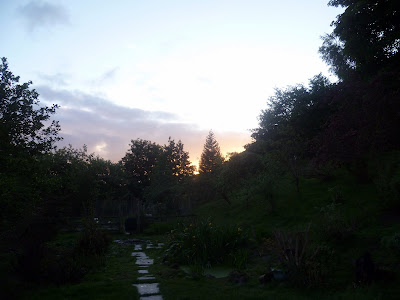 So the sun rose and I went to bed. Just for an hour or so. Didn't want to spoil myself.
Posted by Tony at 21:48