Hetty taking a leaf out of the Berkshires book decided to go run around today. Gardening was top of the jobs list and as there was no hope of finding any gardening tools like spades or forks (last seen holding wire in place to stop some animal crawling under it) gardening entailed a trip to the local nursery where replacements were purchased, along with some decorative bushes for the helipad. Its a sign of how confident we are that new foliage is being purchased. Confident that the threat of goat is no more. Yes their reign of terror has ended. Gone are the days where a days gardening is ruined by a rampaging herbivore. The goats are still alive dear reader so don't panic, but they are in a maximum security complex previously used to house Tasmanian devils, or as they are more commonly known, shitland ponies. They have been in it for a week, the only down side is that they have to have their food delivered 3x a day and they need to be cleaned out but the pay back is leaves on bushes, bark on trees and salads on plates. 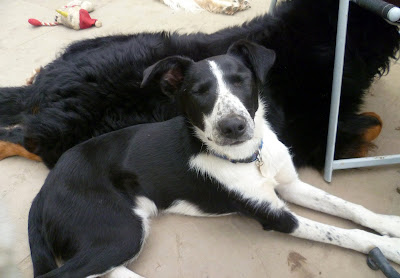 Socks found gardening quite tiring, I found it quite relaxing but was distracted by the need to hang baskets and fix fences. Power tools soon littered the site and an expedition to prune the fruit trees with a chainsaw was only prevented by the sudden appearance of a pint of ginger beer, the alcoholic sort. The sun shone, the birds sang, and gardening soon became sit and look at the view. 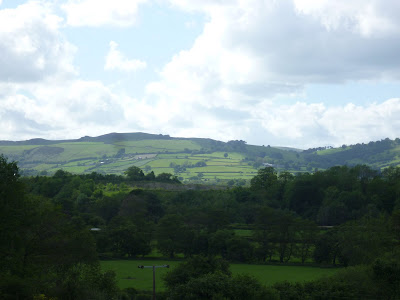 White van man arrived yesterday and as I signed for a giant box of de luxe vet bed, for Reba who still refuses to give birth, as does Pam the pig, he shook his head and looked into the distance "Crap view here innit mate" he said, I handed his pen back and nodded sadly, "Yes it is, but you get used to it" 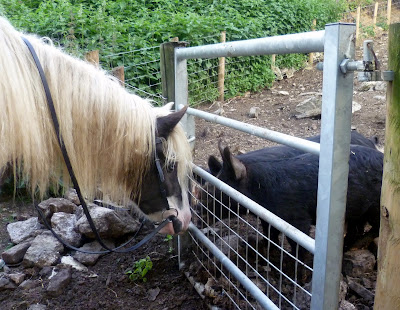 Some work was done with Apollo, still not actually crushed him by sitting on him but he was dressed up in his leather gear and taken for a walk where he chatted to the pigs.
Posted by Tony at 20:54