A sting in the tale 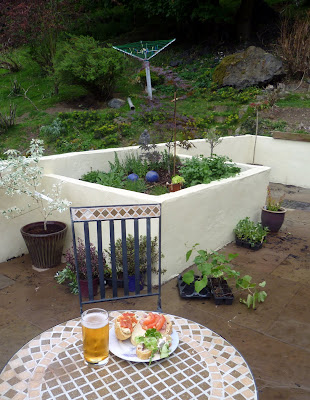 The rain failed to deter yours truly in his quest for garden perfection. The goats, having read the blog have decided to play their trump card and have been ill, threatening to explode (see previous entries on the dangers of UXG ((unexploded goats)) and have laid it on thick in an effort to get the sympathetic release from maximum security)and there was a minor panic this morning when I was told over the breakfast bagel that Levi was in the garden. Levi being a herbivore and therefore a major threat to new foliage was soon evicted and the secret entrance he used blocked up. More of that in another tale.
Today's tale is one of pain. Yes dear reader, gardening is a hazardous occupation and as I sit here in extreme pain, my head feeling like its on fire, and not as a result of a bizarre drinking game, no, my head hurts mightily from extreme weeding. >

The only consolation I have while enduring the red hot jabbing burning sensations all across my scalp and down the right side of my neck is that I, a later forty something fat bloke, would have beaten Usain Bolt over 100m even if he had been given a 5 second head start.
All was well in my world, plants were planted, holes were filled, leaking tap fixed, poorly goats aside nothing was wrong at Rock HQ. The rain, a soft steady rain, was a nice backdrop to my green fingered experiments, it also helped as I had less watering to do, our garden is clay, rock solid from the drought. Anyway by lunchtime I had done enough to warrant the ice cold glass of apple juice. Ok its been fermented but essentially its one of my five a day. 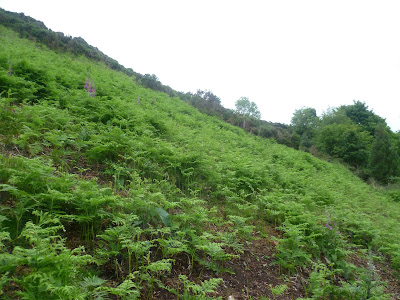 One job really needed doing. The bracken was getting out of hand, and if I didn't cut it back today the rain would promote fresh growth and all my hard work at reclaiming grazing ground last year would be lost. So late PM armed with the new blue strimmer I set off up the hill. Now, only as an after thought did I put on my bright red North Face gortex, I had considered just setting out in my polo shirt, but as there might be stinging nettles flying around I put on the heavy duty jacket and zipped it up so that it half covered my face. Normally when strimming I wear a helmet visor ear defender set up, but the Berners found it and thought it was a new chewy toy. So I made do with my glasses and some shotgun ear defenders. 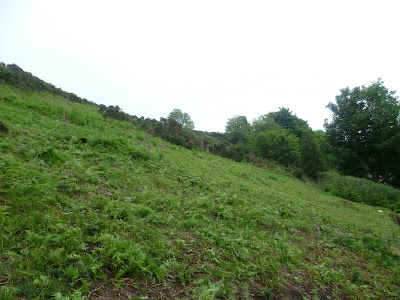 I made good progress up the hill, clearing lots of the very annoying greenery. As I got to PONR (point of no return, I had gone as far as I could, turn back now or risk running out of fuel on the return trip) I paused to survey my work. Something hit me on the back of the head. I moved the strimmer to a no cut position, must have been a bit of foliage flying up. Whatever it was that hit me was moving. In my claustrophobic world where senses were dulled, eyesight reduced by green mush on my glasses, not hearing too good over the noise of the two stroke engine and overheating in my thick clothing it took me a while to deduce what was happening. The sudden pain on the back of my head, repeated several times rapidly in several locations, the appearance of a cloud of very angry yellow and black striped insects all indicated that I had strimmed through their nest.
As I ran downhill screaming "WAAAAAASSSPPPS!!!" (just in case they didnt know what they were") I say ran, partly I bounced on my backside, I considered whether it was a good idea to kill the insect that I had trapped between my head and hand. A wasp as it dies, I mused as I rolled through a gorse bush, gives off a chemical to attract other wasps to avenge its death. Not that these wasps needed a clue as to who their antagonist was, as a fat bloke dressed in red with a strimmer sounding like a swarm of demented wasps forward rolled down the 1 in 4 slope was all the help they needed.
Somehow I regained my feet and ran along the track flailing my arms like a mental patient learning to swim fighting off my stingy my followers. I hadn't upset this many insects since I took the top of a beehive uninvited just to see what would happen. Then as now, you get stung. Lots. 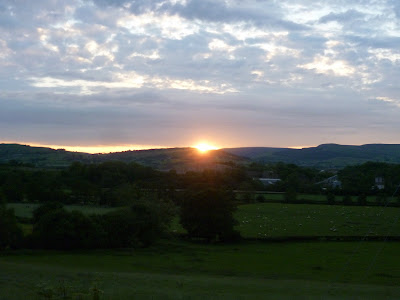 So now I try to ease the pain and forgive Tracey, my beautiful and oh so patient wife for laughing as she searched my scalp for stings still in embedded in my skin. I thank God for Gortex and red wine. The first for preventing life threatening stings, the second for dulling the pain. I tried the old trick of bathing the stings with vinegar, it didn't work. It just made me smell like a chip.
Posted by Tony at 21:47