Boxing Day is traditionally associated with sporting fixtures, and as Rock HQ is snowbound, what better excuse did we need for our own winter sports festival. Temperatures of minus 12 meant no real jobs could be done anyway. What we soon found was that sledging was not exactly as exciting or as fun we remembered it to be. Sledges, long broken, were dumped in favour of the ever reliable plastic feed sack stuffed with straw. A suitable steep slope was found with fresh virgin white snow and the festival of speed began. Or rather it didn't. The first run wasn't what you would exactly call a success. The snow, a fine powder type, refused to bind into any type of slippery surface.

The steeper section led to a greater amount of momentum thanks to the laws of physics, but again it wasn't really successful as there was no safe run out, the choice was crash early or crash into a fence or the huge dog that tried to join in when it was my turn.

What finally clinched it that it should be left to kids was the total loss of dignity. So we pulled the eject handle and baled out to the cottage for mulled wine and mince pies and sports on TV. 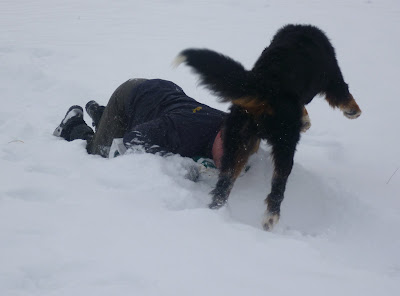 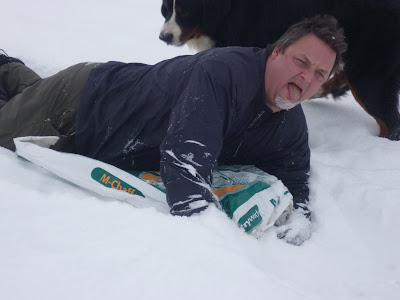