Can you dig it! 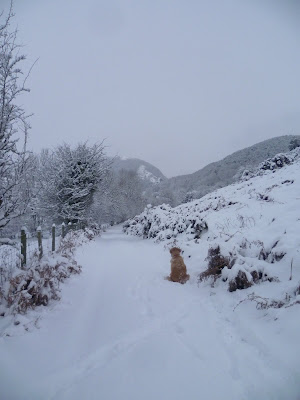 Contrary to popular belief Sundays at Rock HQ are not for lazing around, especially when theres four tenths of a mile of deep snow between us and the Oracles yard then another another three tenths of deep snow after The Oracles yard and the main road. Normally we would sit it out but current work commitments mean that a breakout is needed first thing in the morning. I expect that when I get there it will all be agreed that things can wait until the thaw, meantime an exciting car journey is looming.

So for the first time since we moved in four years ago (and have been snowed in every winter since the everso nice man who sold us Rock HQ sold us our dream with the promise that you never get snowed in) I set about sections of the track with a shovel and ten dogs. It was time consuming, back breaking work but we have learned that when the snow turns to ice on the lane it makes it the dangerous side of interesting when driving. Being the almost shortest day the sun, which was shining, did not rise over our Bonsai Mountain until gone one o'clock when it decided that it was time for bed and set behind the wood some twenty minutes later. Thus, Mother Nature failing to assist in any way shape or form it was down to the spade action of yours truly. Minor sense of humour failure happened when I found two miscreants turning part of the track into a smaller version of the Luge. Their efforts to compact the snow into an ice run so they could lark about before running into a centrally heated house for hot chocolate and iced buns was, for once wasted on me. Anywhere else on the Bonsai Mountain I would have joined in and demonstrated my prowess at sled less sledding. But faced with several hundred metres of snow to clear I am afraid I told them exactly how unhelpful they were being, and as I had ten large dogs and a huge shovel they decided that I was right and left. 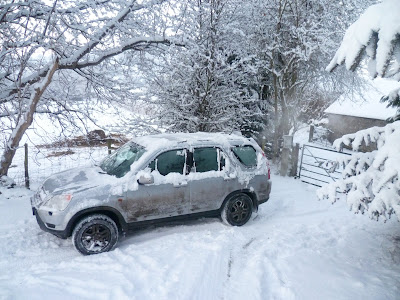 3pm I fired up Hazel, pretty sure that the almost 4x4 could get out, whether we would be able to stop before crashing into the farm gate was an uncertainty and any prospect of getting back to Rock HQ in said vehicle was remote. Suitably kitted out with survival gear which includes an emergency distress beacon (really it does) chemical light sticks, duvet, sleeping mats (for driving over) and, perhaps unusually, a tin of sardines in tomato sauce (Tracey my beautiful and oh so patient wife packed them so I didn't argue, I know my place) Hazel and I set out into the unknown waved off by my tearful wife and ten dogs. Who knew when we would meet again. 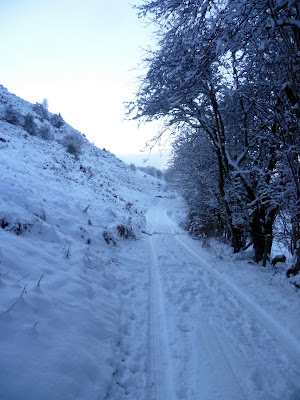 Well pretty quickly in reality, thanks to the furious spade action earlier and the demolition of the Luge, Hazel managed the journey back to the world without any problem, where she deftly danced on ice in the yard of the Oracle, turned and against all expectation got me back to HQ barely fifteen minutes after leaving. Forecast is for more snow. Bring it on. Me, the spade and my trusty tin of sardines are ready!
Posted by Tony at 18:22