Can we have a little cooperation here? 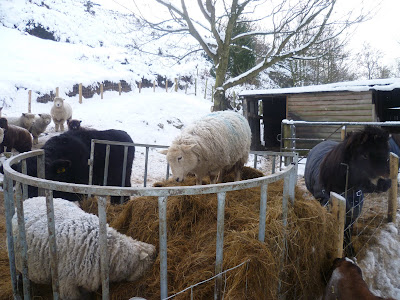 The thaw started today, as promised by the met office. The morning started with blizzard like conditions and a distinct unwillingness on the part of yours truly to get amongst and feed the critters. When the white stuff stopped and rain started I was left with no choice but to do my duty, so as I fetched, carried, filled and emptied numerous buckets the rain hammered down and the critters looked miserable. Major task of the day was to refill the now empty water tank for the house, a simple task involving water and electricity, and then to replenish the animal water tank, a not so simple task involving a hose pipe, suction and physics. Siphoning 200 gallons of freezing water along a 30 foot pipe was a bit like like my school report, showed initial promise but ended in disappointment for all concerned. So as I watched the miserable trickle of H20 fall from the yellow hose pipe I reflected on what a good Christmas we had all had. Steve the electrician had braved the elements two days before and fetched the post, our first delivery for some 8 days. We suddenly went from having no Christmas cards to shelves full so thanks to him and those that sent them. Hopefully ours will have got through, or will do.
The Technohermit joined us for Christmas dinner, living up to his name by immediately commandeering the TV remote and declaring our choice of cartoons for post Queens speech viewing as "tripe". The food on his plate would have fed several families and the declaration that he was not a big eater whilst tearing chunks off a turkey drumstick was far from convincing. On the food front, despite shortages caused by the weather at the local supermarket I think we have enough in stock to last us until Easter. Easter 2012.
Ben and Beth made it through the snow, or rather to a point where Hazel could collect Ben. Beth valiantly fought her way through snowdrifts while carrying a huge box of prezzies, making it to the front door of Rock HQ just as I was leaving to fetch them. It was a joy to be together, and, we hope, the last time we will be together as a family of four. But more about that in the review of 2010 later. 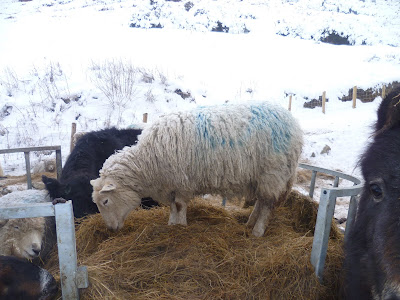 I braved the weather again for the evening rounds, making sure everyone was where they should be and with who they are supposed to be with. I turned on the anti aircraft light, predators are getting bolder since the prolonged cold spell. A buzzard has taken up resident in the garden paying particular attention to the visitors to the bird table. I had the girls with me, the girl Berners. They have to split from the boys at the moment as WooZah and Reba have come in to season early. Walking down the lane in the increasing darkness, rain falling, I happily threw snowballs for the Berners and counted my blessings, and Berners. I was so lucky to have five Berners with me, I threw another snow ball. Something was wrong with that statement. Five.
Up on the Bonsai Mountain I could see the fifth.
This was a big Berner.
I smiled and turned back to the cottage freezing mid turn.
That was a big Berner.
Bigger than usual.
Darker.
I looked back.
This Berner was a curious shape and was going Moo.
Hetty was out and up the hill. My evening was in the balance, fall one way and it would be sitting in front of the roaring log burner with a new single malt to banish my newer cold. The other way led to chasing mental bovine across snow covered mountains.
We all held our breaths.
Hetty took a step forward and mooed pitifully, she like me had no wish to be out in the rain, but being over fifty yards away she could easily become free range.
I stepped forward and opened the gate to her pen.
The Berners sat and watched with growing interest, my move could tempt the cow into walking back inside where she could access her bed, equally it could be the gateway to freedom for two shitlands and thirteen Ryelands who currently share her quarters. The prospect of single malts looked increasingly remote.
I stepped back and prayed to the small god of animal cooperation to manifest quickly.
Hetty looked towards the mountain, snorted and very purposefully walked towards me and through the gate. As I closed it behind her, she turned and gave the "I could have gone if I wanted to" moo and headed for the dry straw.
Firesides and whiskey beckoned so I left the solving of how she got out until the morning. I presume it has something to do with standing in the feed ring, Trevor and falling over the fence into the lane.
Posted by Tony at 19:35