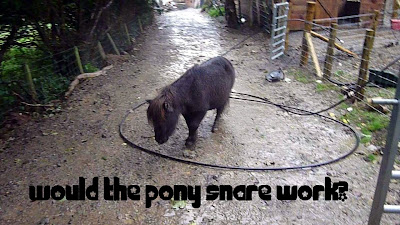 It has been a very busy year here at Rock HQ, one that started with a sense of foreboding, the future at Rock HQ looked uncertain but we were determined to triumph over the adversity laid before us by some very nasty people. And sure enough, the Karma Police have dished out just desserts, and in the winds of adversity we built a windmill and moved on. Massively!
This year saw the introduction of a new species, Hetty the Dexter, who has fitted in to life here like a fish riding a bike, no problem at all. The smallholding has undergone major work and landscaping, fences and gates have made such a difference to life, the new pig pen managed to contain the pork almost until it was ready for the freezer, a half finished pen will be on the top of the to do list early spring and we hope to have the joy of piglets from our own stock this year. Maybe even show some pigs and get rosettes and a better price for our most excellent sausages. On the subject of showing Reuben our lovely big Berner pup, a new introduction to the clan, well we have high hopes for him at Kington show next year. Rocky did well again this year, but second place a second time was a bit disappointing. Still the clan provide much joy and laughs here and the nearly completed extension just for their use has proved invaluable, our floors are still filthy from 32 massive paws running in and out.
A highlight of the year was my parents, sister and brother in law visiting Rock HQ for the first time, its probably my Dads fault that we set out on this mad lifestyle so in case hes forgotten. Thanks Dad.
Several projects were started, and almost finished, the biggest being the helipad sun terrace, an enormous walled patio and pond build that has already hosted one big party and will no doubt be a venue for more in the new year. The party was to say goodbye to Ben, who went away with his job and then came back again, unscathed and really looking forward to more action. Weird kid, but it keeps him off the streets. Beth's moved on in life and now seems settled in a new house, new relationship and wanting a new job, well two out of three isn't bad.
My work has taken me into new and challenging fields of social work and child protection ending the year with a commendation for the way I dealt with a particularly complex case. Then the big behind the scenes project of Red Kite Fostering has been a huge timeconsuming task but is now flying, early spring will see a massive leap forward with that project.
Perhaps the most oddball project here has been the fish farm, which in principle works, the fish are growing and maybe next year there will be some small home grown trout on the barby. There would have been many more to choose from had we not had a couple of disasters with the water flow, once thanks to my incompetence and the other thanks to an idiot on a quad bike ripping up the pipework.

We said goodbye to Rene and Fifi, replaced with newer, perhaps not better vehicles in the guise of Vic and Hazel. Most upsettingly we said goodby to Faith, our dear Gordon Setter who died of cancer aged 5. ON the plus side we swapped three annoying goats for some Oxford Sandy and Black pigs which made very nice sausages.
Undoubtedly the most exciting event of 2010, which is going to dramatically effect our lives in 2011 is that Tracey is pregnant and to say we are excited by the prospect of a new baby here mid February is an understatement. Currently we are in the lull before the storm, lots of jobs to do, seemingly lots of time to do it but in reality 17 of Feb is very soon upon us. Other new additions expected next year are lambs, puppies, foal, piglets and maybe a calf. How busy? Very!
It has been a great year, one that has built on friendships, strengthened us as a family and presented us with some amazing opportunities to develop in 2011. Thank you to all those that have helped, all those that have encouraged us, all of you that read this (some 20,000 a month) and to all our friends, real, virtual, and our family, we wish you an equally happy and exciting New Year that we know 2011 will bring us here at Rock HQ.

Congratulations to you both on the news of the impending arrival of the pitter patter of tiny feet!