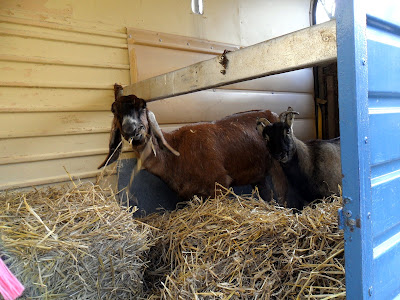 I don't have much patience when it comes to goats at the best of times. Geisha is an exception, I can put up with her antics having nursed her back from deaths door on at least three occasions, her current bout of agoraphobic behaviour is tolerable as we are not using the trailer so she can stay in it as long as she likes. Ambrose, pictured here with her, has sealed his fate and is now on the list of ingredients found in many Caribbean dishes.
I got up really early and drove across the mountains to my office, and as is at this time of year it was dark when I arrived. My day passed, very productively, lots of wrongs righted, usual stuff for a super hero. I went out mid morning to take a translator to an interview and was a bit taken aback by the state of Vic in the car park. Now I am used to Vic looking less than pristine parked amongst the BMW's and Porches of my colleagues. But he looked dreadful, covered in mud, straw and animal prints. Not wanting to reveal to my Turkish colleague that Vic belonged to me I hurried past and carried on learning basic Turkish phrases ready for our meeting.
Back home, again in the dark, Vic was parked under the eaves of the stable and I promised to clean him after dinner. When I ventured out a few minutes later carrying a shepherd pie for the Technohermit the cause of Vic's shabby state was to be seen large as life dancing on the bonnet. Ambrose was violating Vic! A well aimed two litre bottle of highland spring put paid to his dance routine, not before fresh mud, scratches and minor dents in the roof had further reduced Vic's value.
Ambrose thinks its all forgotten and is back in the trailer. His time here has been a happy time, but plans are being made to turn him into something useful and very tasty.