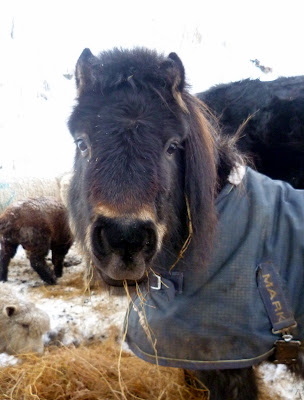 I found today that I am not the only person in the world who leaves Christmas shopping until the last minute. I need deadlines to be able to work you see, so months of planning, preparation, is all wasted on me, I need the deadline to get things done. So while I was over at Countrywide getting our bulk order of dog food, an order that should have arrived a week ago, that should have been there Wednesday when we went but in fact due to adverse weather only arrived today, I was watching a rather perplexed soul wander about with a strange assortment of items. Some pink novelty socks, a socket set, three calendars, a torch, some festive screen wash and a net of peanuts were among some of the things in his grip. I sidled over to hear him mutter, "huh, that'l do" as he added the last slightly crushed festive shortbread box, especially selected for Countrywide and only £14.99 (all butter I suppose) Fully laden he staggered over to the til, almost passed out when the bill came to £194 but as it was twenty past four on Christmas Eve he really didn't have a lot of choice. I felt rather smug as for the second year in a row I have managed to get all my shopping done before Christmas Eve lunchtime. He left muttering further bah humbugs and I got the Clans supply of dog food, biscuits and novelty chews for the month.
Quote of the day comes from my beautiful and oh so patient wife "Well its shiny, hes only 8 months old, of course he'll want to play with it" as I sifted through the debris of the Christmas tree after Reuben had rearranged it. Again. He tried to pass the buck onto Rocky, or at least share the heat, but as Reuben was the only Berner with Christmas baubles hanging off his fur I could spot the tree wrecker.
Having horribly abused Hazel the almost 4x4 with a ton of dog feed squashed inside her I was feeling the festive spirit beckoning. Well, jobs were done, everything was away, fed, warm, bedded down, time for a festive beverage. I opened the fridge. The phone rang. Tracey called me, the Technohermit wanted a word. Coal! I had forgotten he wanted coal. Technohermit was not happy, asked me if I wanted him to starve as I profusely apologised and told him there was no chance of getting any until Monday. I phoned the garage. Open for another fifteen minutes, they had coal, I might make it. I forsook the beer and set off to help the hermit. The forecourt was strangely quiet, five minutes of retail time left, I got the hermits coal. Success. The Karma Police can reward me later. I turned to leave, an oddly familiar figure rushed into the garage shop and looked desperately round muttering "Oh buggerit" . His eyes seized on what he needed and with a real sense of triumph he pushed past me and grabbed the last roll of Christmas wrap. Something else Countrywide had sold out of obviously. 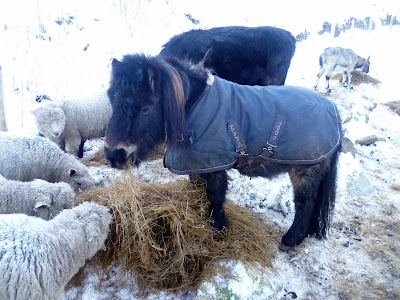