Do you want ice with that? 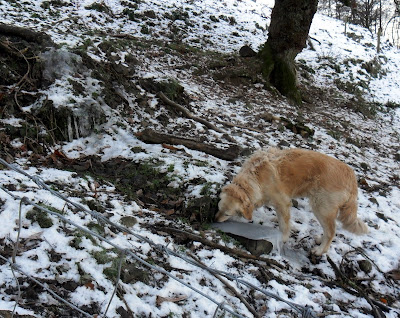 There was an enormous clang first thing this morning out in the yard. The noise came from a rather embarrassed looking brass monkey as he retrieved certain ornate yet vital parts of his anatomy. It is that cold. The promised thaw forecast for yesterday did not arrive. There was an hour or so when the temperature reached the dizzy heights of minus 1, and for around twenty five seconds the sun shone and it was positively sultry, but for the majority of the daylight hours it was cold. The snow has turned to ice, making any attempt at movement across the yard suicidal. I have added to the chaos caused by Jack Frost by filling the horse trough with water and forgetting the tap was running. The slight trickle of water over filled the trough and we now have a two inch thick layer of ice some twenty foot wide on the steepest part. This is providing much entertainment as the Berners on Ice Show is much better than anything on telly.
I did venture out in the repaired and renovated Vic today, once again his sturdy constitution saved me from a fate worse than NHS food while at the same time giving a horse a lesson in survival.
It was dark, and we (Vic and me) were crossing the Brecon Beacons, not going very quick as the ice and snow made that a bad idea. As we rounded a right hand bend with a steep drop to our left something strange happened to the white lines and cats eyes. They were missing. Big Black horse shape missing. For some inexplicable reason Neddy had wandered off the mountain and thought the best place in the world was to be stood arse end facing traffic on a busy mountain A road. Braced for sudden impact I uttered the drivers universal prayer of "Oh Shiiiiiiiiiiiii....." and calculated the injury caused by horse going through windscreen would be less than injury of driving over cliff face. Vics ABS had other ideas and helped me steer a path between the two the explosion of noise and broken glass was quieter but loud enough. I gathered my thoughts and my elation at not bleeding was halted as I thought about poor Neddy. Reversing lights on I carefully retraced my path, Horsey thinking I was coming back for a second go took itself and its no doubt sore backside off up the snowy mountain. I checked Vic, no blood or gore, no hair, just a broken drivers door mirror where Vic reminded Neddy that playing with the traffic can be dangerous.
Posted by Tony at 20:08