Hero of the day 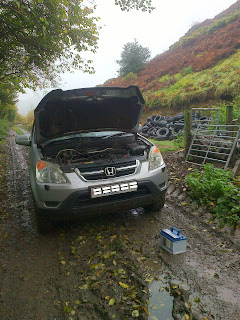 Miranda may be the best 4x4 by far but she could not do what Hazel did for us today, partly because my beautiful and oh so patient wife would not have allowed me to sully the interior with mucky animals, but mostly because Hazel has more space so can carry more stuff. Mind you she didn't get off to a good start, in fact non starting was the order of the day (apparently playing the stereo at volumes where Metallica can be heard over the chain saw is a sure fire way of killing the battery. Again) Anyway, Vic donated his battery (the new one replaced from the second from last open air concert) and Hazel roared into action. 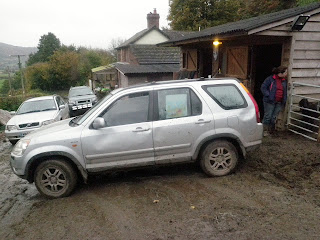 I say roared, I mean coughed and spluttered the opening bars of her swan song (for she is to be scrapped) and firing on all three nearly working cylinders the almost dead almost 4x4 conveyed yours truly to the meeting point on the border where nervous armed guards exchanged three nervous looking Ryelands for cider. Aficionados of the high way code will realise that livestock are not to be transported in family cars, not along the Queens highway, not even when wearing correctly fitting seat belts and soothed by heavy metal. This is why the meeting with the militia was high on the hill where their quad and trailer had captured our insurgents. Back at the ranch the three amigos caught first sight of the extended Goatanamo high security complex. 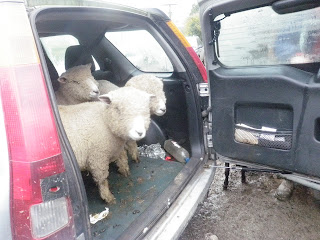 Like Obama I have been unable to close Goatanamo, having a large tree fall across the fences (and through the stable roof) made it a bit less than secure so today's job list included. 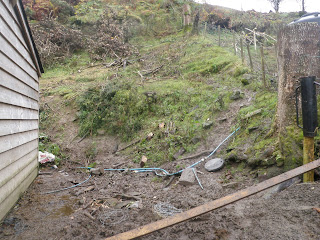 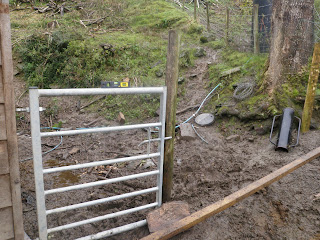 into something more useful, but still as muddy. Note spirit level on gate, I will achieve Jedi DIY status one day. 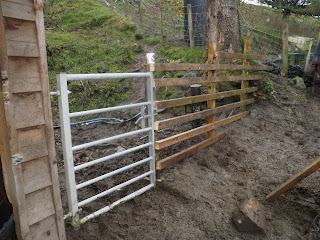 Soon I had this constructed. I also broke the world record for a human going into low level orbit as I recovered the hinges for the gate from the pig pen where Pam and Thor are residing. There cant be many boars that will lie next to you like a dog wanting his tummy tickled while you try and locate the screws preventing the easy removal of the metal plate hinge thingy. So there I was, electric screwdriver in one hand, pig in the other, wondering how/if the screws would cooperate before battery ran out. There I was, builders bum on display. Its amazing how high you can instantly jump when a curious Mangalitza sow presses her cold wet snout into your backside. 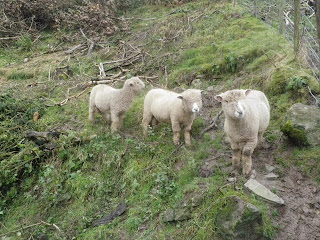 Once I had landed and my heart rate returned to a more usable level the gate was fixed and the three amigos explored their new playground. 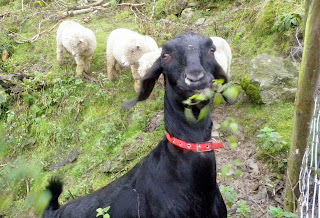 Eva was so impressed by the new extension that she totally forgot she was agoraphobic for about 53 seconds, long enough to grab a snack. 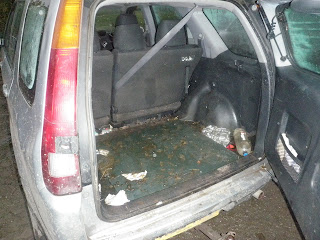 Luckily the three amigos did not make any mess in the back of the defunct 4x4 and Hazel is as good as new inside. 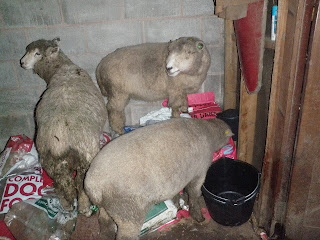 While all attention was focused on the three amigos, Bradley (the one with sideburns) Daffodil and Levi took full advantage of open doors and had a party of their own.
Posted by Tony at 22:36

Those new sheep look lovely. I'm glad Hazel was useful, sad to see the old girl go to the great scrap heap in the sky. Oh and I'm afraid you can't play Metallica unless it's at top volume, anything less is a sacrilage.