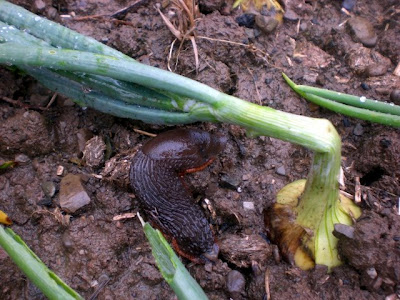 With all that's been going on you might be wondering whats happened on the garden and animal front here at Rock HQ so here is a quick update.

The garden has started to yield produce and meals are actually appearing on the menu that involve only our produce. This is provided the meals comprise of a combination of tomatoes, onions, garlic, courgettes, potatoes, chicken, duck, bacon, ham, venison and pork. The last of the sausages were eaten on the weekend which is a worry considering the freezer held over sixty pound of sausage three months or so ago.

The onion bed has been savaged by slugs, yesterday afternoon there were over a dozen beasties like this one busily devouring the onions. A quick stab with a blade and they were dealt with but the damage is huge, you can see from the picture some stalks have been completely chomped through.

The sheep are out on the hill again after the reminder of where they live, all the lambs have a date with Mr Whirlpool in the next few weeks, lack of sufficient room has spared them for a while.

The pigs are getting bigger and very unruly. Their escape from the pen thwarted they have turned their attention back to me. You take your life into your own hands as you enter their territory with the feed buckets. Now the Stable Sprite will argue different but I think its because there are boars in the pen, there is an air of tension in the group, the only other difference is that there are five instead of four. So the plan is to separate the boars away and fatten them a bit quicker so they can be dispatched quicker.