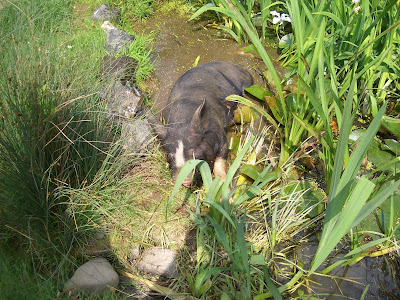 When we moved to Rock HQ we had very few animals. Those we did have were transported here and have enjoyed a fresh lease of life on our Welsh Hill. I often joke that we only had a cat when we moved here, we actually had five dogs, two cats and five fish.
The fish survived the move, against all odds, transported in a bucket of pond water. Here they have enjoyed fresh water from a mountain spring and all the tadpoles they could eat. We even found Terry the Tench in the pond, a huge fish we inherited.
Unfortunately the fishes numbers have come up, the hot weather depleted the oxygen and despite me turning on the hose to aerate the water our dogs have been jumping in and out to cool off flattening the plant life into the water and further reducing the level. I decided to clear out all the plant life to allow the fish a chance to recover but as I pulled plant life out I found the fish had shuffled off their mortal coils and now swim in celestial pools, even big Terry had bought the big one. Perhaps the pigs were just too much competition. Poor fish.
Posted by Tony at 21:49