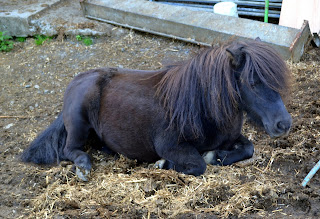 In between entertaining hordes of potential Bernese Mountain Dog owners, nursing stung ponies who very cleverly self soothed by  putting her stings in the cold mud 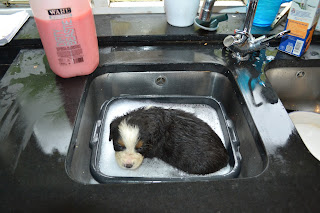 there have been some jobs that were entertaining, such as bathing the pups (heres Ms Odage taking the plunge) and others that have been must dos but boring. One of the militia has lent me a very handy trailer so the job of mucking out everything has begun. Due to this being a frantic weekend this has meant getting outside by 6am at the latest and shovel like mad until 1st breakfast at 7.30am. This has created a compost corner (read area the size of badminton court) down by the bottom pig pen. This has also meant that yours truly has been a tad tired given the size of the task and the quantities involved. So tonight as we reach the end of the Bernathon there was a glimmer of a hope of a quiet night so imagine how happy I was when after delivering Techno's dinner (aptly enough sausages) there, 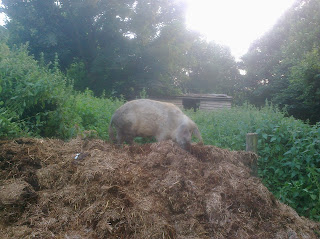 atop of the newly created dung heap was Pammy Pig. 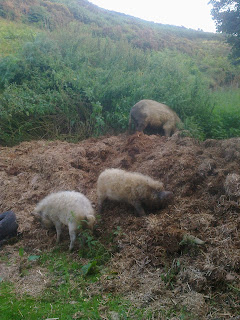 And with her the pig club porkers, one of which was on best behavior earlier when their proud sponsor visited and fed it stolen borrowed apples, and was now intent on rearranging the carefully crafted pile. 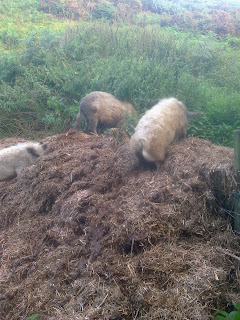 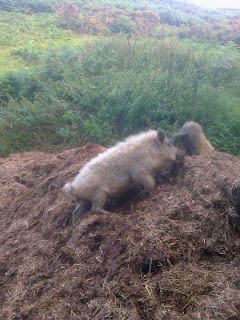 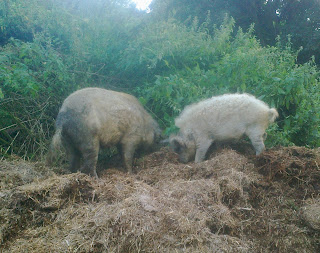 as they knew yours truly would not boldly go after pork through nettles that were some 6 ft high. 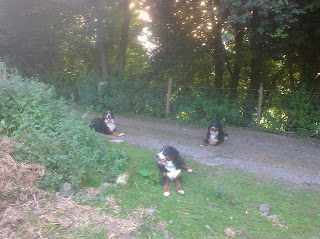 The Berners, ever supportive, settled down for the free show as what followed was no doubt entertaining if you were an observer rather than a participant. 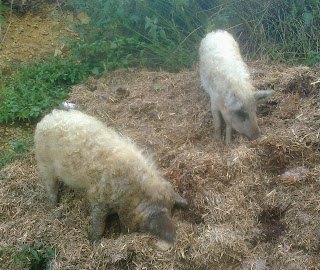 Tweedles Dum and Dee fell under the spell of the blue bucket (now pink after pony hoofs rearranged blue ones, actually I think its a conspiracy to make me carry pink buckets and I never believed the honest they only had pink ones for sale story) full of allure (pig nuts) and they ignored Pam's cries of "Its a trap!" and scampered after me to the pig pen. Pam caved in to the majority and joined them scoffing, and that should have been that had not a curiously recovered shitland followed me and the pork into the pen and so began a magic roundabout of equine trying to assert its authority over screaming porcines over food ownership followed by irrate man trying to remind equine how to find the gate and use it and keep porcines the right side of the wire. Finally shitland got bored and left to the applause of the Berner's and the crashing sound of a recently landed pink bucket that followed her through the gate.
Posted by Tony at 21:36