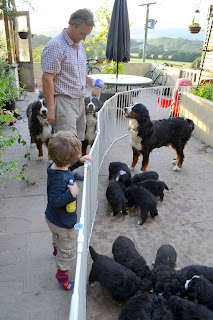 Summer has been fighting a rear guard action before we trip into autumn, its been a glorious day at HQ which meant that the Tsunami of Bernese Mountain Dog Puppies that hit us four and half weeks ago was ejected from the conservatory and dining room and allowed to roam free (free-ish) on the helipad. Here the little time wasters kept us endlessly entertained thus slowing any intended progress on the jobs list. There was progress in several areas though, the ducklings and quail that have been moved from the kitchen and into the aviary, more apples were borrowed for the pigs and the second batch of visitors arrived to view their prospective pups. 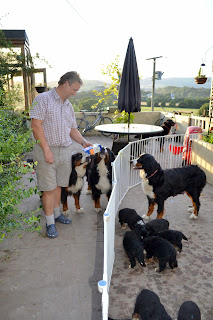 The pups have a voracious appetite and get through several litres of goats milk a day. This is a very messy affair (see paw prints) as the pups swim in it while drinking. Not as clean and clever as their granddad, Rocky, who can drink it straight from the carton. 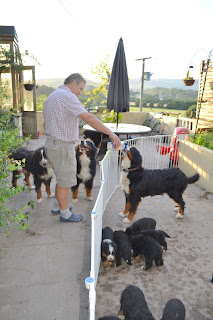