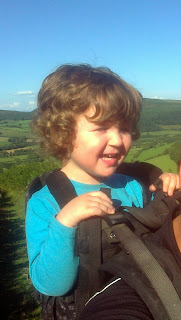 Having spent early doors in sou'wester and wellingtons thanks to the torrential rain it was a nice surprise to see the sun was out early evening and as the forecast is for more downpours that will no doubt add to the temporary swimming pool in the workshop (the one that always appears when the rains hard enough, the frogs like it though) little t and I set out for a quick clockwise ascent of the bonsai mountain.

Stopping to take in my favourite view on the English side of the border something was very different. 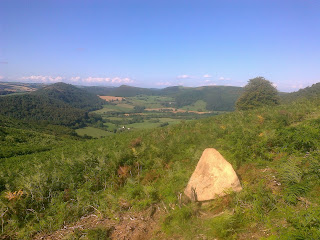 Legend has it that the Whet stone on Hergest Ridge sprouts legs of a night time and walks down the hill for a drink, presumably non alcoholic as a drunk belligerent rock would be a nightmare. It would seem that this is the Whet Stones little brother (or sister, hard to tell with rocks) as it has appeared from nowhere. It is about the size of half a washing machine so its a big piece of rock, not liftupable by mortal men so how it got here as my new favourite standing stone is a mystery. I could solve it, it probably involves militia, farm machinery, ground clearance, and gravity but hey  lets not let facts spoil a good story. 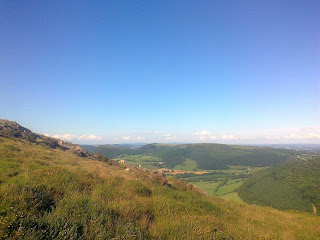 The weather was fine, so were the views 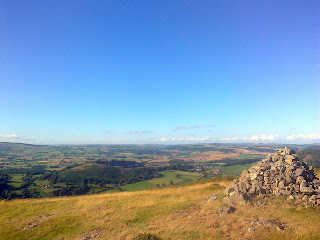 with hardly a cloud in the sky little t and I descended by the North Face Gully in time for tea and medals.
Posted by Tony at 21:56