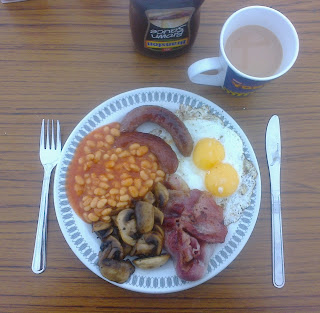 Early doors saw a quick blast on the bike burning off enough calories to earn the promised breakfast in the kingdom of the Stable Sprite. Weather forecaster's got  their chicken entrails in a jumble as it was raining when I set out, but this was a light refreshing rain, albeit horizontal, not the downpours we are used to in summer. I was first in the breakfast queue so had scoffed mine down by the time other guests arrived but I did stay to have a quick catch up with old friends. I was offered a Hobbits ration (second breakfast) but my will of steel was unbending and I refused to give in and set off back to the ranch. 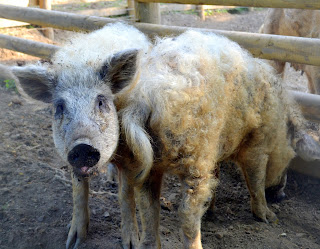 My primary role today was dog bothering, so see the dog blog, but no amount of close supervision saw Bliss or Elf drop a load of Berner pups in the whelping box. When time allowed other critters were attended to, pig club trainee sausages were excellent entertainment while their testosterone charged father charged back and forth entertaining himself 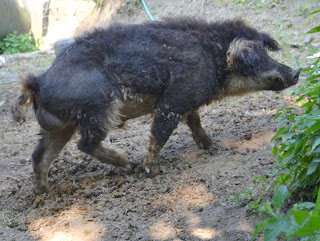 with only one thing on his mind 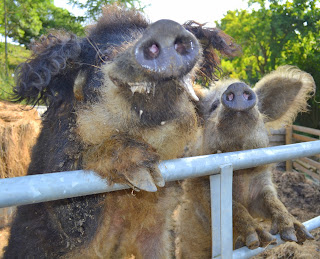 Girls!He seems to have been cured of his equine infatuation and as he is able to climb fences this high with ease he is very happy to find Pam and Bridget waiting for him as often as he can manage, which judging b the noises from the pig pens is about 36 times an hour. 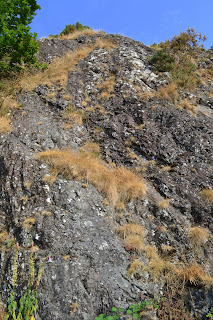 After the rain comes sun, this was the state of play just after lunch, the sun bouncing off the parched face of the cliff that gives Rock HQ its name.
Posted by Tony at 21:57