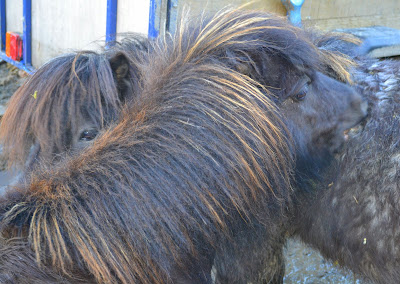 I'm sure the critters take it turns to annoy me and today it was the turn of my little ponies. Being Wednesday its feed the Technohermit day, and put the bins out, so Hazel was loaded with sausage and chips and several bin bags and in the freezing cold night we set out to do our good turn and chores. As I turned out of the lane and executed a brilliant 7 point turn to dump the refuse sacks Hazel's headlights picked out a naughty shitland trotting through the open gate crying "Freedom!"
Quite where Trevor thought he was going is another question but he ended up standing, all too briefly, on the worlds biggest patch of ice. I dropped the bin bags and set off after him, soon both of us were scrambling to the edge of the ice sheet trying to be the first to regain our footing. Note to self, court shoes do not make for good grip on sheet ice. 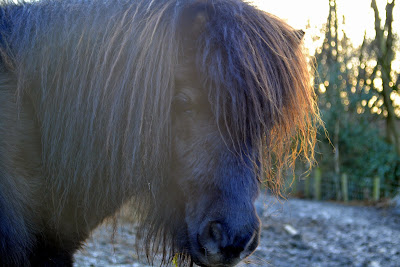 Trevor made it to safety first and ran off towards the Oracles front door, meanwhile Misty ran in the other direction uphill. Me being a bit better at horse psychology than I was set off after Misty who being pregnant was in no mood to keep running and once taken hold of allowed herself to be led back to the periphery of the bonsai mountain where she was sent up the lane with a flea in her ear. I had hoped Trevor would follow. 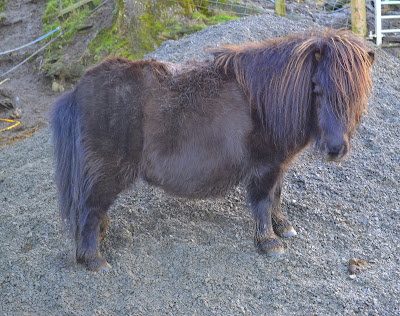 Trevor had missed this as he was now pretending to eat frozen grass and poised ready to scarper at the sign of a slightest advance in his direction from yours truly. I chose to ignore him and drove Hazel back into the lane and as I went to shut the gate little Johnny big potatoes flounced through the narrowing gap. I left him whinnying for all his worth at the gate calling for Misty who, judging by the way he was facing, he thought was still The Oracles side of the gate. Misty being a brighter pony than Trevor remembered what happens around 8pm so she played the divide and rule card and trotted in front of Hazel back to the yard and tucked in to a supper meant for two.