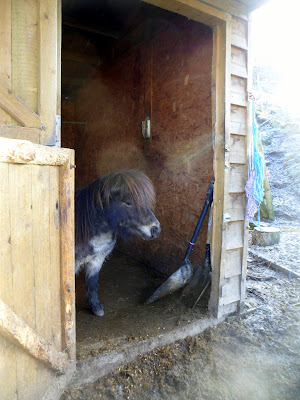 As if life isnt complicated enough at Rock HQ what with mentalist ponies engaged in blood fueds over who should have the stable with hot and cold running horse treats, cows with the morals of alley cats and better gymnastic skills than the Russian Olympic squad and agoraphobic goats that deploy lethal gas as you grope in the dark for the milk taps, then whats needed to fill in any "spare" time is a childs toy, bought by paternal grandparents as a Christmas gift, that when finally released from its box, falls across the floor in a spectacular rainbow waterfall of bright plastic chunks amongst which is a small unobtrusive scrap of paper that states "Some adult assembly required" 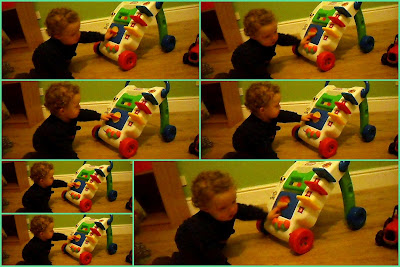 This when translated means adult will have to spend best part of an evening sorting, identifying, opening bags containing 1.3 million microscopic screws, marrying up butterfly stickers and luridly coloured envelope stickers with appropriatly shaped slabs of plastic and then assembling childs toy that helpfully comes with a 17 page instruction booklet in 19 languages none of which are a recognisable form of English whilst at the same time preventing infant from pulling bags over head, eating the smaller bits or pulling hammer off cupboard onto head.
When finally assembled grateful infant stopped sobbing (the tantrum from stopping self inflicted injuries surpassed in volume the cries of same infant terrified by parents use of powertools necessary to finish job a Chinese factory worker started) long enough to advance on new large plastic construction, pat it gingerly, twiddle the twiddly thing before returning to toy of choice, a blue wooden brick with two holes in. Parent notes that small wooden brick is part of a larger number of wooden bricks which would if time allowed create a mutli dimensional brightly coloured wooden train. Suddenly murderous equines, tarty bovines and farting goats seem less of a problem.