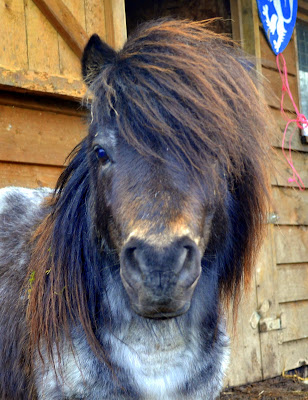 The pocket rocket came over all small horse syndrome today, thus part of the day was spent sorting him out. Having already suffered a SOHF due to Ambrose using my backside as a target, again, Trevor playing Johnny big potatoes around his kingdom put the tin hat on it (the day not my backside).
Tracey, my beautiful and oh so patient wife, horsewoman of the year, took Chester the full size version of horse out for a spin (or whatever the terminology is) and set off in the glorious sunshine along the lane.
Trouble started when the little stalker Trevor followed all the way to the gate that marks the boundary between us and reality. Unable to open the gate without releasing the maniac miniature horse on the general populace yours truly was summonsed by phone to come and sort him out.
Vic and I to the rescue to speed things up, the gateway to the world was a confusion of aggravated thoroughbred, miffed patient one and aggravating tiny horse. Trevor was given suitable advice and set off back along the lane, the portal to reality swung open, Chester haughtily pranced through, taking forever to do it, meanwhile pocket rocket seeing an opportunity for more mayhem shot through at light speed and made a bid to go over the hills and far away.
The next few minutes passed in a blur punctuated by swearwords as I fought to get a grip on one horse and avoid being trampled to death by another. Eventually Trevor gave up and got the right side of the gate while remaining on the wrong side of his owners.
Last I saw of him was a horse shaped blur as he overtook Vic on the way back to HQ.
I say last I saw, he has been tucked up in his bed.
He did create more havoc later in the afternoon when a pleasant group of around 20 walkers went through the yard,exchanging the usual hellos and walking fars and yes they are big dogs aren't they. Directions were given to the cauldron and warnings shared about feeding the trolls as they were planning a lunch stop.
They left. The sun continued to shine. Birds sang their hearts out.
Not long after a sound like a demented werewolf impersonating a small but terrifying pony accompanied by several raised voices suggested that the trolls were the least of the hikers problems.
Posted by Tony at 21:57