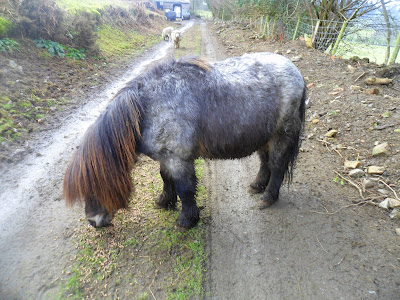 Little Johnny Big Potatoes, aka Trevor the Pocket Rocket (above) has been up to mischief again, this time inflicting ABH on one of his companions. He is often found loitering with intent around Chester's stable door, they seem to have a duel over air space, lots of snorting and teeth snapping, occasionally I find a clump of Trevor's mane where he wasn't quick enough, but never any real trouble. 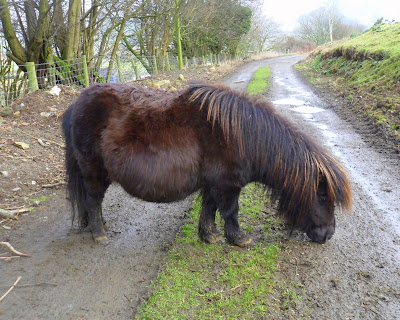 Trevor has been known to bring Misty along to observe this display of equine machismo, she being the sensible sort and definitely pregnant loses interest quite quickly and has her mind set on more important matters like wheres the idiot with the feed bucket. In all the sparring over the stable door has been of little concern to all but those involved. 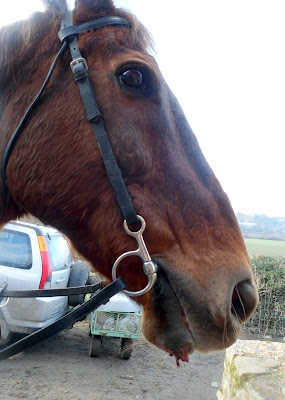 Until this morning when the front of Chester's stable looked like a prop from a slasher movie, the blood was everywhere. Yours truly first thought that the poor horse had caught himself on something sharp, an unseen nail, a screw head, the edge of a salt lick holder, but after a thorough search of the interior nothing was found that would cause Chester to start leaking red stuff. He being the calm sensible sort let me have a closer look providing I promised not to spray him with anything that made it sting and it was clear that he had been bitten. There not being a full moon last night meant no werewolves were about, a few strands of brown turning white horse hair was all the proof that was needed to convict Trevor of terrorism. 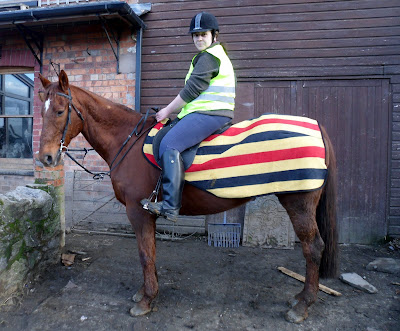 Chester being a brave war horse was awarded an extra ration of nuts and was fir for action later in the day when he set out to test his new hanging cheek snaffle bit. He couldn't try his Mexican nose band as it would have rubbed his wound.
Trevors been advised against further attempts at world dominance and banished to the other end of the smallholding to think about his behaviour.
Posted by Tony at 21:02

Is Chester a high cut gelding ? If so Trevor might end up taking on alot more than he can boss around. His days of dicatorship might be over permently if he pushes Chester too much. Hopefully though it won't come to that.
Kit