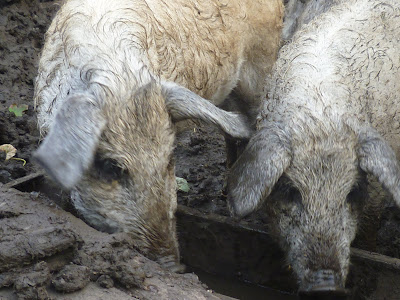 "Are any of your pigs meant to be out?" Not the usual opening gambit to a telephone call at work. Supergrandma was looking after the apprentice smallholder for an hour or three while chores were being done. I confirmed that all pigs were not out, they should all be in. "You've not let any in the garden then?" the description of the Somme like mess as garden hung in the air for a second, "No none are supposed to be in the garden". Thoughts of fence climbing pig causing mayhem, must raise fence height, electrify current fence, shoot pig or get it a trampoline to keep it occupied, all options considered.

"There might be a little one out, she climbs fences" more silence.

"Theres more than one out, theres big ones, little ones, white ones, black ones and ginger ones with dots on"

That's all of them then.

Persuaded Supergrandma not to go and wrestle pigs back into pen, she and beautiful and oh so patient wife were to wait the hunter gatherers return.

On return, in the dark, Rock HQ was under siege. All pigs were engaged in an assault on the front door.Several gates lay on the floor having failed to prevent progress of rampaging porkers, this included the ornate metal gate by the front door. Pammy and Bridget were in the process of turning the green trolley into a battering ram, Guinevere and the two baby boars were constructing a rudimentary trebuchet while Rosie the Red piglet tried to recruit the rabbits to the cause. Iggle and Piggle favoured the direct approach and were front trotters on windowsill looking in, snouts pressed to the window like orphans from a Dickensian novel. Vic's arrival curtailed their mass attack on the cottage and they raced around him like native Americans in a cliche ridden wild west film.

Thankfully they respected yours truly personal space (or his size 10's)and followed him Pied Piper stylee back to the slammer where they got extra rations for compliance.

Only Morgana was missing.

The big and beautiful Berkshire pig had love on her mind and had spent her unexpected free afternoon in search of Thor.

And what had this hunk of male piggy done while there were six females of different breeds and sizes making them self available to him?

Hidden behind his horse trembling.

I am beggining to have doubts about his commitment as well as ability!
Posted by Tony at 21:04