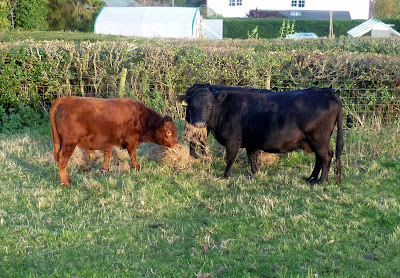 Our Tabby cat Earl has been missing for over a week, he has done this once before and turned up weeks later looking very thin and very happy to be home. Yesterday we went looking for the awol mog, centering our search around one of the holiday homes on the premise that stupid cat searching for free food might have got himself in the the temporary neighbours and then after they had gone, not got out again. Our search was fruitless, er, I mean cat less, no ulterior motive honest and so we returned to Rock HQ and pondered his whereabouts, down a rabbit hole, in a foxes stomach and so on. We hoped he was alive and kicking, if not, then that he was giving whoever it was that had him a hard time, at the very least indigestion.

First thing (well not quite, but its dramatic licence) as I was preparing the first brew of the day and thanking the small god of not gone off milk (fridge has died, replacement not here til weekend, keeping milk fresh has been a problem, how do you like your coffee one lump of milk or two?) for allowing this morning ritual to pass without cheesey beverages there was a loud bang from the utility room and a supersonic ball of tabby fur rolled into the kitchen before springing to his feet and giving the cat equivalent of "TaaDaaah!"

Earl was home. Half a pint of almost fresh milk and some past its human eating by minced beef was devoured in record time before he sat and announced to all who would listen his wondrous stories. As none of us speak cat we just welcomed his yowling and he in turn took on limpet like qualities and stuck to one of us all day. He is presently asleep with several Berners who also missed him. Not sure where he had got too, a farm house across the valley is having building work done, maybe he got stuck in there. Today was the first time this week they returned to the job. Or maybe hes just a cat that gets lost easily, maybe his Cat Nav is broken.

God does protect fools and cats !!!
But that is one of the main reasons why I keep my cats inside only. So I don't have to have heart attacks thinking of where they are. Acourse we also live on a dangerous rode so they would end up dead quite easily too.
At least you dont' have to worry about coyotes.
Kit
PS How is Hetty taking to her new beau, maybe know she won't run off again when in heat !!!