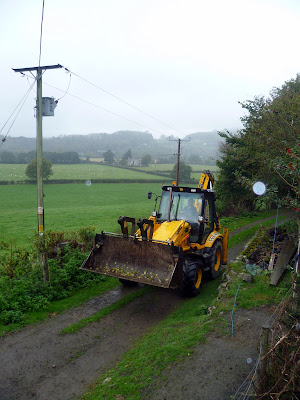 We are suffering an acute outbreak of mud here at Rock HQ. Bearing in mind the lack of rainfall (picture above shows different!) we are nearly knee deep in mud in the Corral OK. The comedic value of losing a boot or wellington wears thin if it occurs daily and its presence has stopped several projects that need to be completed in quick time due to extra accommodation being required for future bovines. Thankfully help is to hand and today the cavalry arrived. Unfortunately the techno gremlins have got to us again, this time no electric for several hours and then ghosts in the machine meant the PC wouldn't play ball so for now theres just this glimpse of the big yellow beast, tomorrow there should be lots of before and after shots. For once going to put the geese away tonight was a doddle as the mud had gone, it was so easy just strolling up to the goose house door and shutting it without fear of footwear loss, or rather it would have been if the buggers hadn't taken the opportunity of unhindered movement to leg it once it became clear it was curfew time.