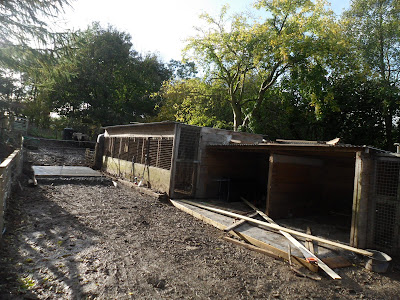 The weather was kind to us today as the concretathon continued in the Corral OK. The ponies and Thor watched from the battlefield of Oak Bank and urged us to get the job done quickly so they could have dry hooves. The downpour overnight meant part of the morning was spent digging the drainage ditch that will go alongside the concrete pad but by 9.45 George was in action. 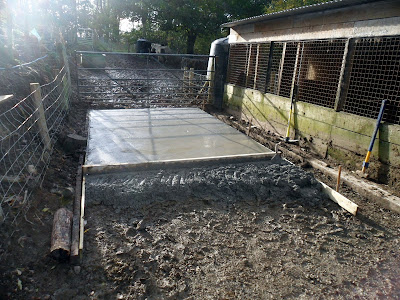 I must admit to having a bit of a downer for the first four barrow loads, then a whole host of why am I doing this thoughts for the next four, followed by some really dark thoughts as the next four loads combined with the previous only covered the first three feet. As we were doing over 15 feet even with my math it was going to be a long day. 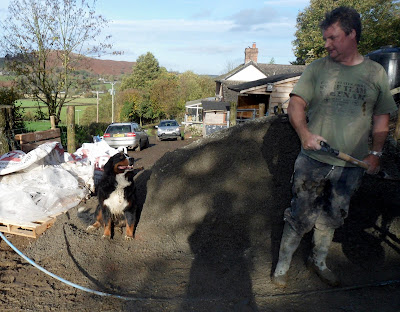 Perseverance is the key and slowly slowly the mountain of dry ingredients was transformed into a very neat concrete pad. Rocky kept me company for part of the day, he replaced Spotty who dutifully watched every shovel full and followed every barrow load and didn't put a paw wrong. Rocky on the other paw thought his best occupation was to be a trip hazard or to drain the buckets of water. 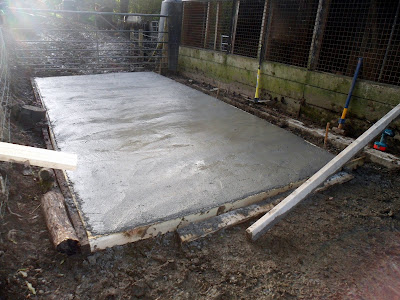 Mid afternoon saw the days task completed. I chose to ignore the mangalitza piglet digging up the driveway, putting it down to a figment on my imagination. This was a very active figment who just before dark climbed the fence and returned to the pig pen when the evening carrots were delivered. 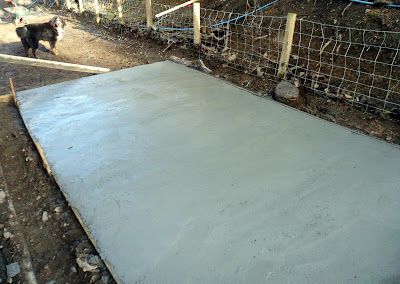 This time Rocky managed to resist the temptation to add an interesting pattern to the concrete pad.
Posted by Tony at 20:14