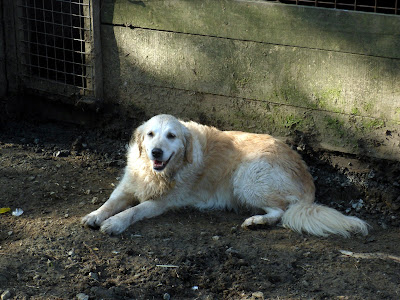 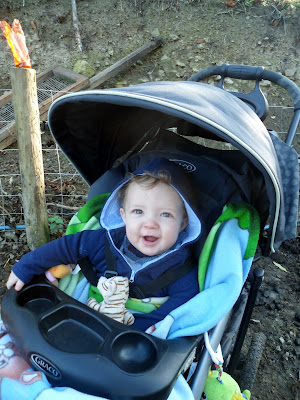 and under close scrutiny from the apprentice smallholder 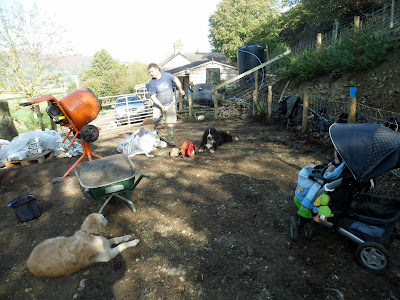 the most controversial decision of the Rugby World Cup was almost forgotten as George and I got on with our own game, making floors. As there is no project manager available to tell me how much of what I need I relied on the good old fashioned method of guessing, much like Karl did when he put up the goat house. The accuracy of his guesses were at the time questionable but "looked right" however when tested today by yours truly with a tape measure and spirit level a couple of startling facts were quickly established. Fact one. If we went for the standard level floor it would mean that the front of the shelter would have four inches of concrete while the back would have 16 inches on the left and 22 on the right. This then established fact two. Entrance height would be five foot six while the back would be four foot. Fact three was not discovered until several barrow loads of concrete was in place, entrance width was eight foot and the back wall seven foot eight, this provided a very interesting interlude while trying to tamp the concrete down with a piece of wood that either jammed against the side walls or let you hilariously fall into the concrete, dependent on where you were along the floor. 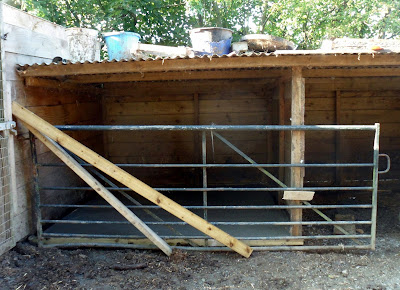 There was a brief discussion at one point (my sohf), key aspects being shall we get the digger back and flatten the site and start again but in memorial to Karl (last seen tied to a tree in Burma) we decided to carry on regardless. The finished article is no silk purse, but its far from the sows ear it could have been and providing no badgers start fighting in the mix (first three tons of concrete laid for the stable block had its smooth finish tampered with by a pair of sparring badgers) we will have a serviceable floor in the morning. We did gain some really useful information from today's escapade, you get ten large barrow loads of concrete from one ton bag of mixed aggregate, it takes five bags of cement to turn it to concrete, for each ton mixed you need two cups of tea, four Jaffa Cakes and a pint of cream soda. The second shelter will be concreted next week as the non existent project manager forgot you needed shuttering. Live and learn.