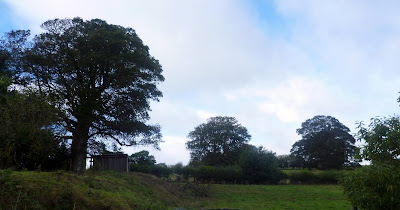 Regular visitors to these pages will know how pressed we are for space, our sometimes neighbours describe us as Noah's Ark, seemingly there are at least two of everything. Only a few acres of the Bonsai Mountain are ours (or the banks) and grass is at a premium, any green shoot has to run the gauntlet of a huge number of critters before it even thinks of becoming a blade. 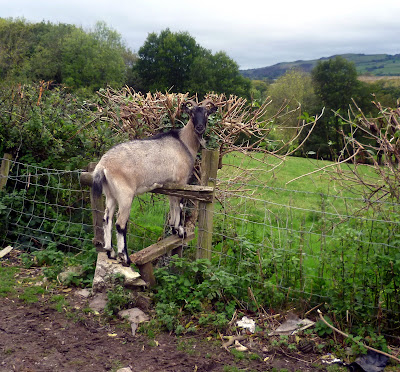 And the militia that surround us are not keen on incursions, they have never said but with characters like this one about to breach the perimeter in pursuit of chlorophyll, they covet their vegetation as much as we do ours. Its been a long held idea that one day we would rent some land, but that idea has never got past the if only stage as finance wouldn't allow it and the militia are about as likely to rent their land out as England are to play a decent game of rugby (today did not start well rugby wise!) So imagine our surprise when visiting the farmers supermarket a few days ago, there I was eating a second free bacon butty and my beautiful and oh patient wife waved a phone number at me. Land for rent. So after the disappointment of the rugby, the new fridge safely off the lorry, all the critters fed and watered, we set out to see this promised land. The pic above is it, its not huge, but its within walking distance (if you like long walks) it has secure fences, the entrance gate is not on the road so its secure (no thieving gits will be able to park up and rustle anything, not even a crisp packet as the landlords house overlooks the field) it has a water supply and a huge field shelter. Even more appealing is the almost peppercorn rent and we can have it for at least six months. This will be a great help especially as Rudy is arriving here at Rock HQ in a couple or three weeks. The plan is that Pedro and his harem will live in the promised land until his ladies return to give birth to apprentice lamb chops. Rudy and Hetty will take up residence in The Love Shack, a soon to be modified section of the kennel block. Thor, above, will then share a building with a diverse set of neighbours ranging from a love sick cow to a twenty year old Beagle.