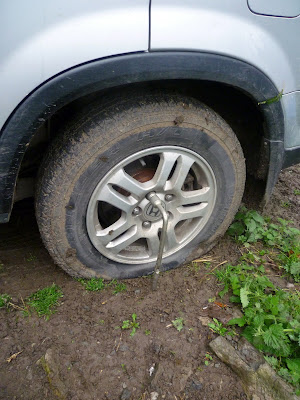 Not the best of starts to the day when, as I was feeding the pigs and concentrating on winning the dog show later on, Tracey my beautiful and oh so patient wife alerted me to the problem Hazel the almost 4x4 had presented us with. Still could have been worse, it could have happened 10 minutes from a ferry on a busy motorway in rush hour traffic, in the dark with the car full of holiday luggage. So it being in mud, me in a ditch and fighting off the nettles, that was easy. Almost. 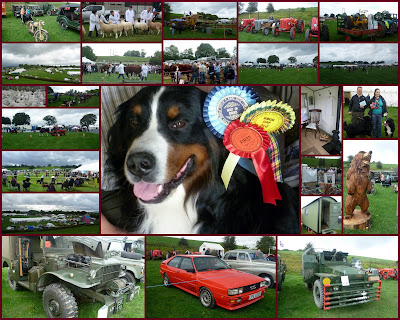 Still it wasn't going to spoil the day and once the stricken Hazel was rebooted with the spare (did I mention the spare wheel carrier fell apart when I tried to release the wheel, no? How we laughed!) and the flat along with Nerg Nail delivered to Steve the puncture repairman, we got on with the planned day and Kington Show. It was show time for two of the Dolyhir Clan, Rocky and Reuben, as can be seen from the pic Rocky did very well, Reuben got a second, not bad for his first show. See dogblog for full details of Rocky's triumph over the young upstart. The show was brilliant, the rain kept off for most, it was an eclectic mix of really rural and really odd exhibitors, the red Audi was a hit (Ashes to Ashes), the Dodge was back in town (it will be mine!), the Shepherds hut was food for thought (how does an relic of animal husbandry suddenly become a des res in suburbia?) more sheep than you can shake a stick at and Royalty. What more could you want, well beer, hot dogs and ice cream, I found the latter two so was happy. Click on the collage to get a better view.