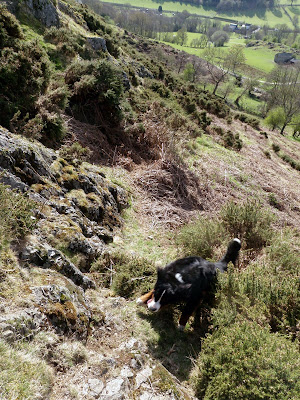 I really don't think we will ever tire of living the dream on the Bonsai Mountain. You never know whats around the corner or who you are going to meet. I took the Technohermit his dinner last night and as Rene was still in intensive care awaiting major surgery I took Shanks' pony along with Rocky and Faith. This was good choice as along the way we found one of the militias sheep stuck fast in the fence of the Ghost House. Not having a set of wire cutters in my pocket extricating the wild beast was impossible. Faith provided the answer by almost unseating a mountain biker as he shot past. Being the jolly sort he wasn't at all concerned that my mental setter had almost become an intrinsic part of his front wheel and from his backpack he produced a weedy set of pliers. These being far more substantial than any I had on me were just the job and in a few minutes we managed to extricate the woolly back from its trap and waved the ungrateful sheep goodbye as it ran off without so much as a backward glance. The cyclist turned out to be a very nice man and we had a chat about life, the universe, hill fires, mental dogs, and I told him a lesser known bike trail from the Cauldron and off he went to check it out. 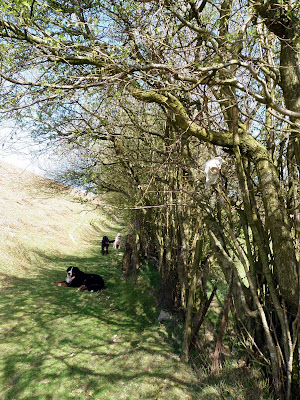 So today after some of the jobs were done I sloped off to do some more BBMC training, this time taking in a different route which included the North Face Gully. Bliss and Spotty really enjoyed the climb to the top but most of all I think they enjoyed the attention they got off four backpackers also enjoying the sights and sounds of our back yard. Faith would have got some fuss if she had sat still long enough, one of the walkers had owned a Gordon Setter so was keen on catching Faith but she had other ideas. Poppy the pathetic triever ingratiated herself by fawning around and at one point I am sure she tried to get into one of the rucksacks. The dogs and I said goodbyes and ended up where we started an hour before, the yard of Rock HQ. Geisha had taken a fashion tip off Crispen and was sporting a lovely line in buckets. 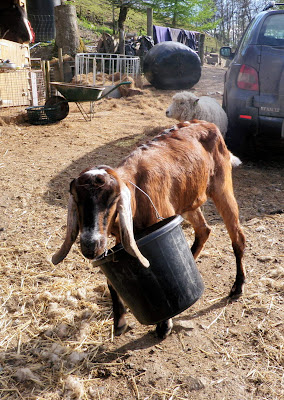 You might be surprised to see Rene the Rx4 in the yard. So are we. After the seemingly terminal symptoms on Friday we were overjoyed to hear that he had made a full recovery for only one tenth the amount of the money tree than we had anticipated. 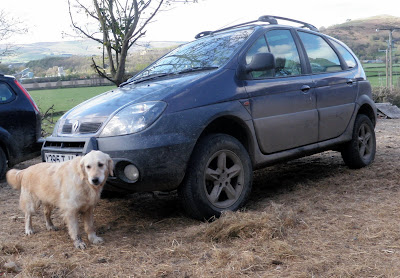 So as the birds began their evensong and Tracey, the Dolyhir Clan and myself were in the garden the four backpackers appeared at the gate. They just wanted to tell us that they thought Rock HQ was amazing and wished us a long and prosperous life here. You do get to meet the nicest people sometimes.