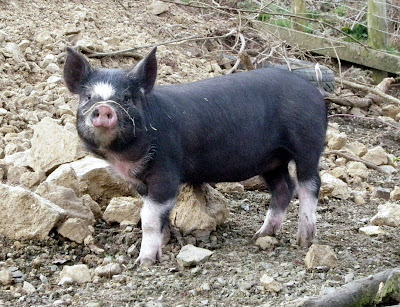 Training for the BBMC continues despite a freak accident today in which I managed to break my left little toe and at the same time severely bruise the little toe on my right foot. The lengths I go to to self harm are quite extreme but this one was a good one even for me involving a lamb, a Bernese dog, a door and a sofa leg. I tend not to wear footwear in the house, apart from dirty hiking boots (something which makes me very popular) So barefoot today I stood up from the PC, took emergency evasive action to prevent a lamb being squashed underfoot, the brave Berner bolted as the lamb that also made an emergency manoeuvre to miss me crashed into its side. Bolting Berner hit my left leg which changed its direction as I strode forward and was stopped dead with impact on the sofa leg. As I howled and jumped sideways clutching my left my right foot was stopped by the front door that was half open at the time. Dogs hid, birds flew their nests, all aircraft were grounded (later reports say it was due to volcanic ash, not so, it was because the air was blue over Rock HQ) and Tracey told me not to be such a baby.