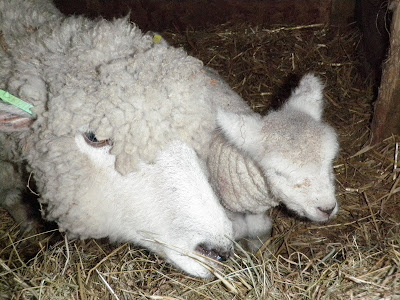 Any thoughts of a long lie in to aid recovery from yesterdays man test were banished by the alarm clock and the knowledge that somewhere out there on the 5 million acres of wilderness that borders Rock HQ were two of our sheep. The sheep having ignored my advice regarding contraception have got themselves up the duff, as evidenced by the arrival of big Trouble yesterday. Springtime who is not one of the worlds natural mothers seems to be coping well under the strain of luxury accommodation and all the fresh hay she can eat. More of that later, anyway I dragged my weary self out of bed and set off around the Bonsai Mountain looking for Roxy and Ebony, two of our stupider specimens who will I am sure have got them self in the family way.
Somehow they became the masters of disguise as there was no sign of them as I traversed the hill. They are gluttons and with the sparse offerings from Mother Nature on the hill it was more than a cause for concern that these sheep had not mustered with the rest of the flock for breakfast. Fearing that they were in the death throes from giving birth, stuck lambs and so on I resolved to search again once I had got some important jobs done.
One of these included taking the little Berners to the vets to have their dew claws removed. This is not a spectator sport and the little yelps of pain are quite unnerving. Reba was not allowed in the operating room as mothers tend to get a tad defensive when they detect the vet might be hurting their progeny. However despite the yelps of discomfort the first pup was fast asleep by the time the vet was on the third so clearly they forget the experience very quickly.
As we unloaded the pups and and Reba I was very pleased to see Roxy and Ebony stuffing them self at the ring feeder. No need to traipse around the hill again. Wrong. They were spotted at sundown heading back into the cauldron, I shall attempt to coax them back later.
Meanwhile Trouble was missing.
A quick final check revealed that Springtime was sat eating by herself. Trouble had vanished. The mystery was soon solved, she had been playing Queen of the castle by standing on the bale and had fallen behind it jamming herself between the wall and bale. I do hope Trouble will stop living up to her name.
Posted by Tony at 20:47