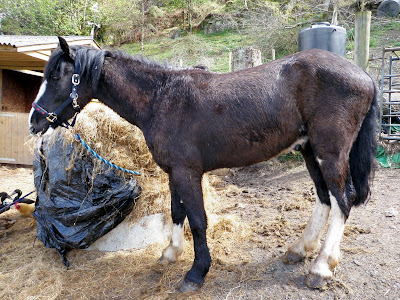 Not sure if its an all time record but I have changed my clothes six times today, due either to having to go somewhere, weather conditions or dogs. The day has also been on the manic side of busy. Not enough hours in the day and all that but we managed to pack the hours with a huge number of jobs. 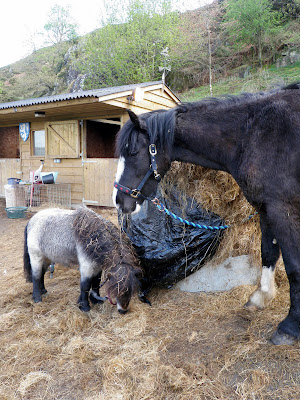 Started with Rene to poorly Rx4 going back for further treatment, the critters all had to be fed before we got to the garage, raced back in Fifi to get the horses ready for the attention of the Blacksmith who gave us top advice on how to catch crayfish, offered his lovely Warrior 4x4 at a bargain price (wouldn't accept magic beans and beer bottle tops so we couldn't have it) and delivered the crushing news that if our shitland pony Misty is pregnant then so is he. Noooooooooooooooooo! This means no little patter of tiny hoofs next week as planned. On that theme it seems at least one of the Oxford and Sandys over at Stable Sprites is one link closer to sausage as she has come into season again so is not in pig. 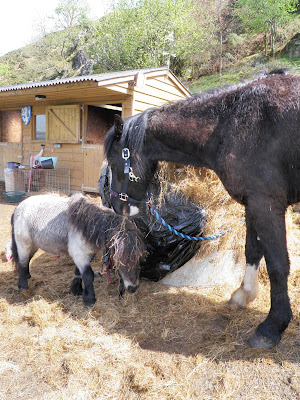 While Tracey was dealing with the Blacksmith I was trying to talk sensibly to a computer programmer who was trying to decipher my insane ramblings and odd ideas into a useable website design. The results of which will be up and running mid May. The TFTR pages will never be the same again, but you will still get a tale everyday, a recipe of the week and much more. Those that want to can even feed the animals. All will be revealed! 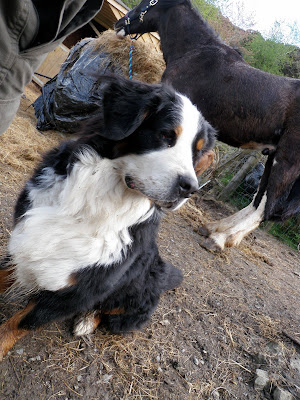 After the formality of computer speak I was glad to get back to Rock HQ and muck about but a surprise visit from Uncle Rodders and Auntie Maggie put fresh strain on the washing machine as clean set of clothes number 4 were changed into. By the time they had been Bernered, had the tour and met the beasts these clothes were changed out of as I went to a meeting to discuss the future plans we have for Rock HQ. Several hours later we were back on the ranch changed again to do the evening rounds which finished in the pouring rain around 9pm. Planning on letsdonothingelse mode we collapsed on the sofas and thought about the last few jobs to do before bed. One of these involved me putting away the veg we bought earlier. Decision made. Put veg away, hot chocolate, sleep, get up early and start again. As the last of the legumes were carefully laid in the racks a high pitched cheep alerted me to the fact that the eggs in the incubator were intent on making sure we went to bed a lot later than planned. So far 8 are making a bid for life, and six more are cheeping.