The joy of sheep 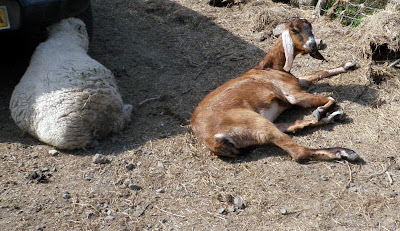 Some friends came to visit Rock HQ today and for once guests were treated to a guided tour without getting coated in mud and dog slobber. The mud has gone for a while as we have had sunshine for the last week or so. The dog slobber was gone as they had a toddler and gentle as our dogs are their enthusiastic welcome can be a tad overpowering at times, especially for a small, and so they were banished to the workshop and introduced to the tiny human one at a time throughout the day. 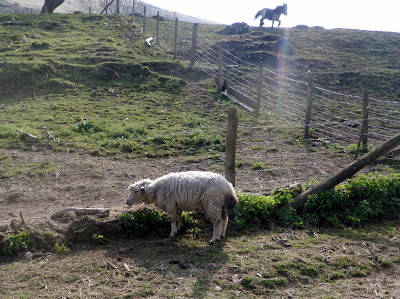 They are keen sheep fans so our little flockers showed them the full range of sheepness. Firstly Crispen who will normally welcome you as a dog would, right down to wagging tail, refused to come out of the shade, unlike Geisha who is a sun worshipper and suffers from MLS (melting legs syndrome) whenever struck by a sunbeam for more than two seconds. The two lay side by side, as different as chalk and cheese, taking in and avoiding the rays.
Maude, above, demonstrated how intelligent sheep can be by getting stuck fast in the stock fence. Trevor the pocket rocket ran around like a loon as we tried to extricate the fat lamb who perhaps by now realises that the grass isn't greener the other side, especially when viewed through wire netting. Another of our horses, William, dazzled us with his amazing fence jumping ability. He was the wrong side of the fence and munching his way through the militias pasture when spotted. Tracey had to go and fetch the beast while I served lunch. Unfortunately she forgot to photograph his daring do, her dramatic rescue, and the ever so high barbed wire topped fence he jumped. His hoof prints led to the five bar gate and stopped suddenly, perhaps the fat Welsh cob had done better than we thought and jumped the even higher steel gate! Suddenly the idea of riding him seemed, to me anyway, a lot less appealing. I want a plodder that is steadfast, bombproof and above all refuses to run and jump even when the urge takes him. The mystery of how this normally inactive cob managed to get the wrong side of the perimeter was solved when I remembered that just along the track of the Bonsai Mountain the fence had collapsed, age finally taking the fence posts to ground level. William had simply wandered along the track in the sunshine and spotted an opportunity. Good news, he's not an athlete hes just a naughty boy! 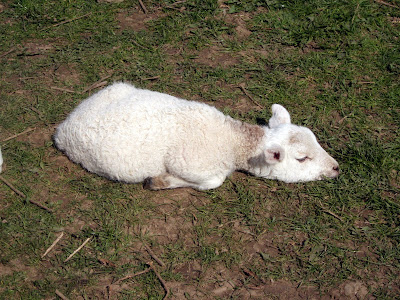 More good news. Fern is rallying. Today a bouncy individual who has drunk nearly a litre of milk. She also enjoyed a snooze in the sun.