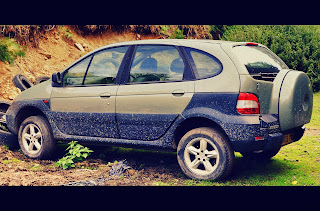 Its been a long time but finally the right planets aligned, the correct documents were in the same place at the same time and placed in the hands of a tax official who had a sense of humour and waived the £25 fine for failing to have correct document but a copy doodled on by small child and  a correctly filled out form requesting the original and the debit card worked without the Bank Manager phoning up to see if yours truly knew how much he was pruning the money tree, and so without too much ado the final legal requirement to allow Renatta on the road was obtained, a shiny new vehicle excise license.
Renatta, purchased last April for less money than your average racing bike, used only as a mobile disco since then is now back in action. Yesterday she managed 4.7 miles without breaking down and just as I was thinking hurrah, money well spent she faltered.
Panic stricken I persuaded the misfiring Rx4 to the nice man at the garage who agreed she was indeed misfiring and in need of some professional TLC.
As it was raining for a change he lent me a hatchback which is the first small car I have driven in years and felt less safe than a bike in traffic. I got home and explained to my beautiful and oh so patient wife that Renatta was poorly and perhaps a waste of money. Full of self loathing I made a cuppa and pondered car crushers, the merit of cars as chicken shacks or pig arcs and trade ins.
Phone rings.
Alls fixed you can get her shes going great.
Good news, and I've not even managed to drink my tea.
Set off back to do battle in the hatchback, survived and handed not so hatchback back.
Explanation for faltering Rx4.
Heavy rainfall, cars stood unused for months, water collected in spark plug recesses, one collected quite a bit, a lot in fact, so much it shorted out  the spark and so created a misfire.
Short term solution, dry out water from recess, back to 100% power which from a 16 valve 2 litre engine is quite a bit.
Long term solution, move somewhere with less rainfall.
Posted by Tony at 22:25