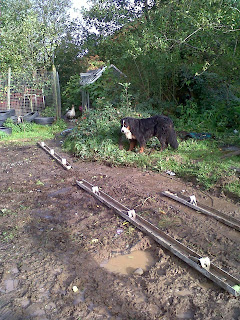 Thoughts of turning the newly created mud bath into anything that resembled a grey slab of level concrete were banished by two major factors today. Weather being the principle culprit, it was to say the least a bit wild with gusts of up to 80mph, a militiaman on a trials bike roared into our yard ostensibly to tell us that our randy Ryeland ram was bothering his ewes, but also that the wind was so strong on the ridge it blew him over. 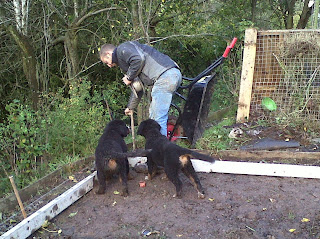 A window of opportunity opened at 12.30 and yours truly, ably assisted by Steve the concrete, set about stage two of project Swiss Chalet, the shuttering. Thanks to herculean efforts on my part the site was lovely and clear and through the combination of sledgehammers and Pythagoras we soon has a perfect rectangle. (Note to Math teachers, if you made it clear that the application of Pythagoras' theory in relation to triangles would have some relevance in the real world of concrete then I guarantee you would have had my attention in class, as it was...) Our two youngest clan members found Steve an endless source of amusement and thankfully he didn't mind the muddy paw prints over him. The picture below shows a direct hit on the left side of his jacket from Reba who just had to get up close and personal. 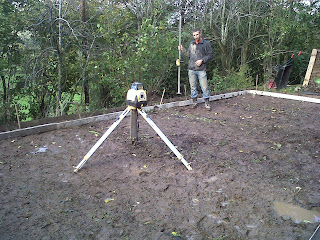 However, we must remember that we live on a mountain so flat bits are at a premium and although what we were standing on looked very flat we are sorely disappointed once the Star Wars droid fired its everso level lazer. The pic above shows how much higher Steve's side has to be if my side is taken as the level to start from. Rapid rethinks were had, the amount of stone needed to raise that side was dismissed as far too many barrow loads so we took the middle as the start point and dug down my end and raised the bottom (ooer) corner. 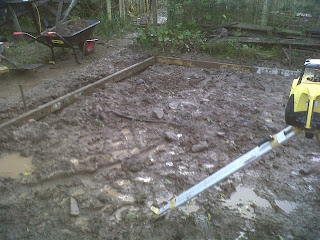 This tedious chore was made even more so by the fact that the nice man who sold me Rock HQ had taken great pride in laying a grid like array of concrete paths that needed to be smashed up before we could reach the clay underneath. My burning arms, aching shoulders and massive blisters on my hands are indicators that this was a tough afternoon and that I am more used to pen pushing than pick axe wielding. The weather broke just as we got the shuttering perfectly level, all I have to do now is remove the soil contained within. Thats stage three.
Posted by Tony at 22:38