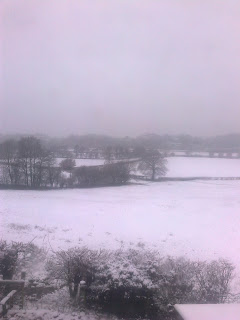 Bit of a surprise throwing back the curtains yesterday morning and finding tons of white stuff had fallen, especially as I had got a soaking walking back the night before and had been woken up in the early hours by the ominous sound of dripping water. Something hit the cottage roof at speed a couple of nights back, presumably a large unguided peacock, this, we think, has dislodged a tile on the roof and allowed water to drip into our bedroom. Thankfully it misses the bed and it soon stopped, and as I am not going to climb roofs at 3 am on account incompetence and fear of zombies I did what any one would have done and pulled the duvet over my head and hoped for dry weather. 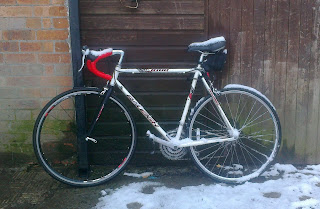 Snow meant an interesting ride, and as I forgot to stable R100, a cold wet bum as well. Still the day was going to be a good one as Mr BT Man was coming round to re-connect us to the world. Or not. Not as it happens as he did find that our equipment was working, and that somewhere the line was bust, but quite where he was unsure and anyway he needed a hoist to do that and as he was deficit vital hoist then would me mind awfully if he left us too it and he sent someone else out. So we are still out of contact and hoping he remembers where to send a man with a hoist. 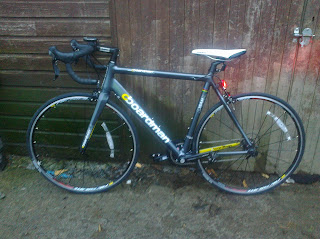 The day did get betterer though as my new steed was assembled (not by me!) and ready for his first spin out. First impressions are that he is a very quick steed and providing I manage to miss the Olympic sized potholes that are currently on the UK roads its going to be a lot of fun riding. Even in the snow.
Posted by Tony at 14:16