Off to a good start! 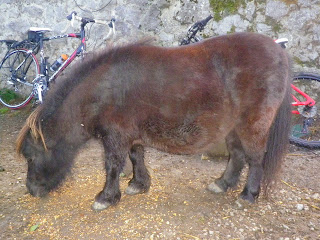 This morning could have gone so much better. Vic was booked in for a new alternator to be fitted but as yours truly had parked him side on to the mountain the last vestiges of fuel sloshed to the right of the tank but the pipe to engine bit is on the left so he refused to start. He also refused to move when I tried to push him so I took a risk and turned the key with him in reverse so the battery turned the engine over and slowly Vic reversed and got to a level where fuel reached the engine and he started.
Suited for a busy day in the office I pointed him in the direction of travel and headed off down the lane. At the gateway to the world he refused to stay put as the hand brake failed so I had to switch him off while I got out. He then refused to start.
Flat battery.
I coaxed him back to life but 25 yards down the road he died again and only just made it to a gateway so he didn't block future exits.
Walk back home in pouring rain.
Beautiful and oh so patient wife phones garage, are the keys in it they ask, I tap my pocket, no but they will be in half an hour she says can you fetch Vic and fix him, yes they say, once they stop laughing.
I make to leave in Hazel, last thing patient one utters is have you got keys for Vic, absolutely says I and head off in Hazel.
Alongside Vic I get out to put keys in him for grease monkey but alas, I am key less. Race back home and retrieve keys from playful toddler who has somehow acquired amazing pick pocket skills.
Having mild SOHF get back in Hazel and turn around, beep horn at rampaging Ryelands blocking lane, surge forward just as clueless sheep get between wall and gleaming R200 racing bike which falls just in time to be run over by front wheel of turning 4x4 turning front of bike into scrap metal.
The day did get better.
Posted by Tony at 22:40

Poor you, I certainly hope it got better.