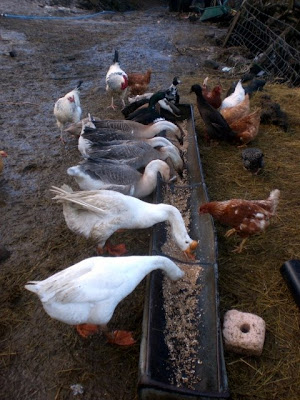 With the change in the weather we set about jobs today with a vengeance, lots got done despite Tracey doing the most amazing comedy fall on the doorstep. Having survived all the snow and ice she lost her balance stepping outside (her ME does make her a bit wobbly sometimes) falling face first onto the yard. Luckily she fell onto a clean patch where I had hosed the sheep pooh away minutes before.

Rene was taken to be repaired, his exhaust is under guarantee so thankfully that's a huge bill we wont have to pay. Fifi on the other hand was behaving erratically on the drive in to town following Rene and so the nice man at the garage was asked to check her over. The wobble in the steering wheel was caused by one of the tyres having a huge tear on the inside wall. Thankfully the dodgy tracking that had worn both front tyres to the metal hadn't caused any damage other than a huge dent in the finances.

More cash was splashed on a repair kit for our wood burner, having seen one in action properly yesterday we had a feeling that ours was not quite right. Simply put, you would feel warmer sitting in front of the fridge than sitting by our wood burner. Google to the rescue, the tech spec of our stove and a plan of all the gubbins inside was soon located. This showed ours was broken and put together wrong so after a bit of tweaking with a huge hammer and and some TLC from Tracey the thing is fired up and we are in shorts and T shirts its so hot. Well not quite but its an improvement.

Animal feed arrived aplenty courtesy of Stable Sprite who rather thoughtfully got us half a ton which I gratefully transferred by the bucketful from his trailer while he held the ravaging hordes of sheep, poultry and goats at bay. Hay is being delivered later in the week and so we are fully prepared for the country grinding to standstill later this week when 2mm of snow is forecast which means civilisation as we know it cannot survive.