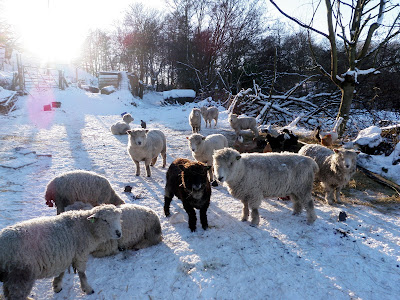 Now the flock has been gathered around Rock HQ for most of the cold snap, and for the majority of the time a really handsome Ram has been with them, belonging to the militia he has been fed and watered since before Christmas and flirting with our girls. 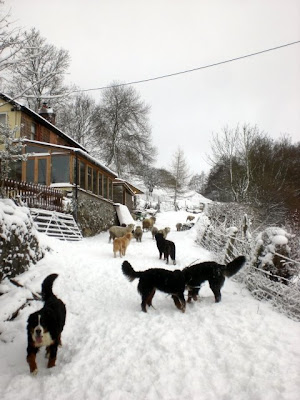 On the whole he has been no trouble, admittedly he put Crispen, our rams, nose out of joint and yesterday he nearly blotted his copybook by getting his horn trapped in the trough, in his panic he picked it up and very nearly has a disastrous encounter with Fifi. Luckily just before impact it fell off leaving the car unscathed. As you may already know we are marooned, snowed in, and as the picture above shows our lane is deep snow, a real playground for us all. Yesterday I noticed a new set of tracks on the lane, leading up to the entrance of the yard where they stopped. The vehicle then reversed and turned by the barn. It was quite a mystery for a while. 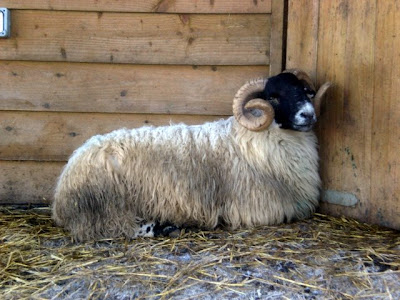 Until this morning when I fed the sheep and found this handsome chap had gone. Obviously a member of the militia had been told of the whereabouts of their prize ram and ventured up the lane to find him asleep under the eaves of the stables. Safely loaded they took him away. We missed all this as I am ashamed to say, when all this was going on, with 10 guard dogs no doubt giving their opinion of the goings on in the yard we were both asleep on the sofa. Well it had been a hard day!