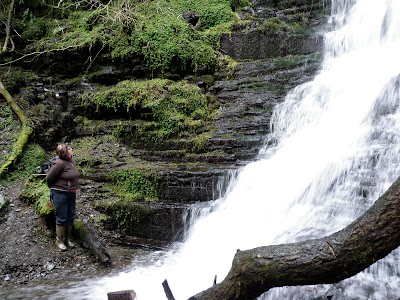 Being English living in Wales it was only right and proper that last night we celebrated Scotland's greatest poets birthday. So invites had been duly sent and the dining party assembled for a 7 course blow out on traditional Scottish fayre with a Rock HQ twist. Scottish Salmon and Cheese tartlets were followed by Cock a Leekie soup, the cock had been spared as no one was brave enough to kill the brute and it seemed a shame to off one of the smaller less aggressive ones for some flavoured water. Stable Sprite disemboweled the Haggis but I refrained from launching into prose, however tradition held over the toast to the Lassies who looked absolutely fabulous in their fancy frocks. Stable Sprite looked marvelous in his black tie and tux while Tom and I let him down by bottling out at the last minute and opting for smart casual. 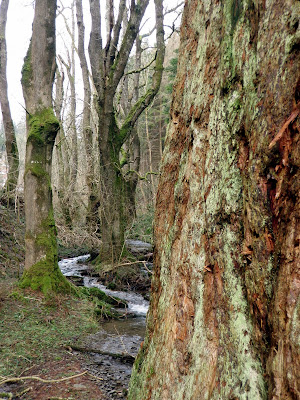 Haggis tatties and neeps consumed it was time for Medallions of Aberdeen Angus cooked in plum and whiskey sauce on tattie scones with a dollop of rumbledethump. Belts bulging we launched into sweets which were Tipsy Laird (probably a bit big given what preceded) home made shortbread (a nasty rumour that the trifle was about to served with sweetbreads caused by the hosts inebriated mispronunciation made our guest shudder but this was quashed when they saw the neat biscuits) and Kranaken. A home made whiskey liqueur called Atholl Brose was the nicest surprise of the evening, aside from the bouquet of flowers given to Tracey by the Sprite and his lovely lady. 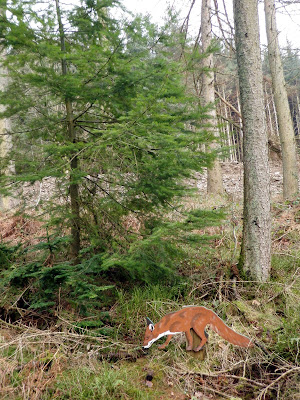 By the time the cheese board appeared our guests begged for mercy and sloped off to the drawing room, yes we have a whole room for drawing, and sat about in contented silence while I recited my favourite comedy sketches. These went down very well. I think. 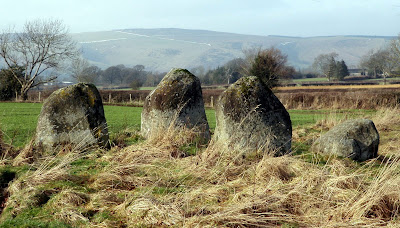 Inevitably after such a huge feast payback came by way of a fairly long walk today. A fox had taken advantage of the lull in hostilities last night leaving the tell tale scat blatantly placed on a rock not twenty yards from the front door. If only I could get as close to it as I did this one above on the walk. Jill was introduced to one of our favourite spots,Water Breaks Its Neck, and we also visited the standing stones close by reputed to have been dug out of our garden. Quite an achievement considering the stones weigh tons and were moved miles by hand. Its amazing what people did before they had telly.

Sounds a cheery nice Burns night you had!
Our's included clootie puddin brought along by a friend from County Down.
We also had kranaken, the recipe for which was passed on verbally, but didn't stick, due to alcoholic amnesia!
Do you have it, and would you mind passing it on?
My aspirations in smallholding encompass fruit and veg growing (43years) and hens (3 years). I hope kranaken recipe calls for eggs.
It's quite amazing I can remember its name. We had one of Robbie's poems read in full by a well-oiled friend from southern Scotland. I can't remember which one - it might as well have been in Urdu!

Kranaken is simple and quick to make,

Mix up as much porridge oats with as much brown sugar as you want, toast it under the grill(not toaster thats messy) until the brown sugar starts to melt, take out and let cool, mix it up with as much fresh whipped cream as you want with as many raspberries as you have, a dribble of whiskey if needed and there you have it, I great pud!