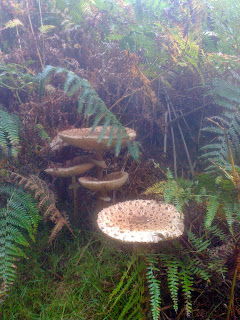 Given my capacity for falling off objects and my unerring ability to cock up DIY jobs it may have come as surprise to the casual observer today to see yours truly on the roof of Rock HQ in torrential rain puzzling over the complexities of slate roofing.
This episode began some three days ago when I noticed a slate where it shouldn't be (the floor) which meant that either an itinerant roofer had cold called and left a free sample, or, more likely, one slate had succumbed to gravity and hit the deck. Now as we have an everso friendly builder visiting this weekend this did not seem like too much of a drama until this evening when the heavens dropped copious amounts of H2O in a very short space of time (thus creating the frog aquatic complex in the workshop again) and the forecast was for even heavier rainfall.
On inspection the missing from the roof but found on the floor slate was one of two that had had the bad manners to leave their post and both were over our bedroom and more or less over the exact spot where MkII rug rat has his berth.
As infants are not prone to thrive in environments conducive to waterboarding superhero Dad set off on the replace slate mission via the broken rabbit hutch, oil tank and Berner Annex roof thus negating the need for technical equipment like ladders (which I fall off, see 2007 and nearly losing left arm saga)
Once aloft the task was relatively simple despite rainfall of Biblical quality and pretty soon I was taking a standing (cautiously) ovation from the crowd (Bernese Mountain Dogs eager to play rescue, whats that he fell off  the roof....) and descending in a controlled manner without injury and seeing as the rain has got heavier without getting in the house it was a job well done. I still got told off for being an idiot by my beautiful and oh so patient wife for going up without telling anyone but that's the risk a superhero takes.
Posted by Tony at 00:09