This green and pleasant land 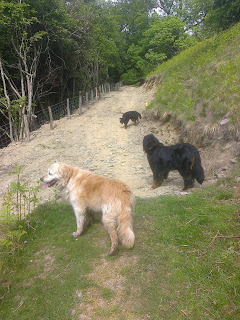 Poppy the pathetic triever stands on what was the footpath the last time we used it while Rocky and Reba start to explore the new 6 lane superhighway created for who knows what as it goes nowhere other than to where we are. 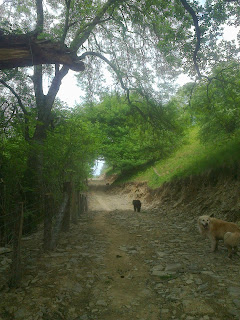 As can be seen this is no small engineering project, hundreds of tons of rock and earth have been moved to who knows where. It wasn't only us who wondered what  was going on as we made our way along the devastated hillside. 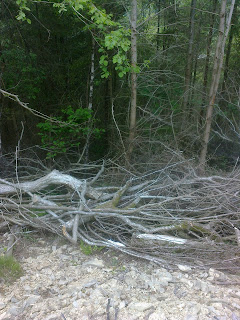 An elderly gent emerged from the trees (I wasn't imagining it as Reuby's owner Glen was with me and he saw him too!) and demanded to know what we knew about all this. As this was our first encounter with whatever this is we were unable to furnish him with any other information aside from no idea. He also wondered where all the dirt had gone, and why were they(whoever they are) spending money on this (whatever this is) instead of fixing the roads people actually use. We left him muttering to the bluebells and hugging trees. 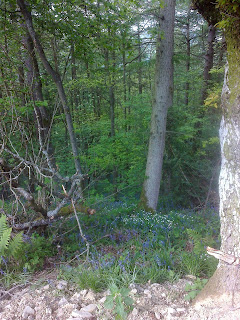 Finally whoever did this got fed up, or ran out of money and we were back to unspoilt ground 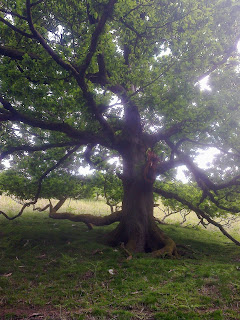 but if you looked closely damage was everywhere such as on this mighty oak, which came through pretty unscathed so long as you only want branches on one side. Back at the ranch as I watered the horses a smell of death was on the air, sure enough lying in a clump of nettles was one of our coloured Ryelands, Ebony, very dead. As she was one of our first ever lambs born here at HQ its likely that some age related illness got her rather than sheep suicide or sheep self harming behaviour. 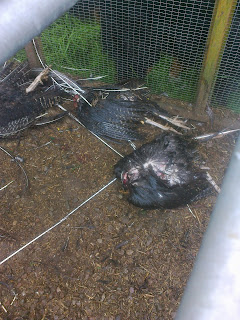 Death in the form of the bloody Mr Fox arrived this morning though and got into the turkey run. It always bothers me the fox lover types who say the fox is only doing what comes naturally and they should be looked after not exterminated, but when you are up close to the results of the fox's behaviour you tend to take on a different view akin to kill them all and let God sort them out. Fox managed to get in through a 4 inch hole in the roof and bite the heads off our three turkeys and Laurel the peacock who was with them. Having killed them all, and unable to get the birds out through the 4 inch hole in the roof fox managed to get out and make good its escape. It didn't even eat anything. Just killed.
I have asked for guns to come back so the favour can be returned.
Posted by Tony at 15:20

I'm with you there Tony, we had all twelve chickens killed by Foxy and can't say I have a lot of sympathy for them, although I don't agree with hunting with horses - long story. Hope you get the guns to even the score.

That tasteful new road that blends in so well is probably preparation for your very own nice shiny new wind farm on the hill.